Now the international community is focusing its attention on the orientation of the advance of the Democratic People’s Republic of Korea in 2023, which was advanced at an enlarged meeting of the Sixth Plenary Meeting of the Eighth Central Committee of the Workers’ Party of Korea held in late December last year in Pyongyang, the capital city of the country.

What is particularly worthy of note is the general direction of its work for the new year.

The year 2023 is a year of key significance for the DPRK as it is the third year of the Five-Year Plan set forth at the Eighth Congress of the WPK and marks the 70th anniversary of the victory in the Fatherland Liberation War (1950-1953) and 75th anniversary of the founding of the DPRK (September 9, 1948). This indicates that 2023 is a year which has an important bearing on the development course of its socialism and the annals of the Republic.

In his speech to the plenary meeting, Kim Jong Un, General Secretary of the WPK, set it as the general direction of the new year’s work to further expand and develop the all-people struggle to open up a new phase in socialist construction and thereby provide a decisive guarantee for the fulfilment of the Five-Year Plan. Then he called upon the participants to make 2023 a year of great turn and transformation to be clearly etched in the course of development of the DPRK by redoubling the fighting spirit displayed in 2022 and making all-out efforts to attain the year’s goals and fulfil the new long-term tasks.

The meeting also clarified tasks related to the stable development of the national economy and improvement of the people’s standard of living.

The meeting defined 2023 as a year of making a big stride in the development of the national economy and a year of attaining key goals in increasing production, implementing the strategy of readjustment and reinforcement and improving the people’s living standards, and set it as the main task of economic work to complete in the main the readjustment and reinforcement plan decided by the Party Congress while boosting production in all sectors and units.

Having set housing construction, a project welcomed by the people most, as the

first major policy task, the WPK decided to build a new street with 3 700 flats beside the construction of 10 000 flats in the second stage in the Hwasong area in 2023, the third year of the construction of 50 000 flats in Pyongyang, by pushing up the construction of the capital city in a bolder way. It also decided to direct greater efforts to rural construction on the basis of the experience accumulated in 2022. If this decision is carried out, a total of nearly 35 000 flats including 10 000 in Songhwa Street and 800 in the Pothong Riverside Terraced Houses District, both completed in April last year, and 10 000 in the Hwasong area nearing completion will be built in Pyongyang, and the appearances of the rural villages in the country will be changed as suited to regional characteristics.

In addition, the plenary meeting concretized the tasks to be prioritized by the agricultural sector and ways for implementing them. It also set forth tasks for light industry, regional industry, public welfare service, fishing industry, urban management and other sectors directly related to the people’s living. And it stressed the need to adhere strictly to the principle of attaching importance to and prioritizing science and technology in developing the national economy and improving the people’s living standards, and set forth an innovative orientation of the effort to raise the country’s level of science and technology to a new height. This means that to bring about a substantial change in the people’s living remains an invariable policy task of the WPK in this year, too.

Also particularly noteworthy in the recent plenary meeting is the crucial policy resolution on further strengthening the self-defensive capabilities of the country, as well as the central tasks for the sectors in charge of the affairs with south Korea and foreign affairs.

The meeting analyzed the present situation of the inter-Korean relations and the external challenges seriously threatening regional peace and security and, on this basis, stressed the importance of strengthening the nuclear forces of the nation. The WPK made it clear that the nation’s nuclear forces consider it as the first mission to deter war and safeguard peace and stability and, however, if they fail to deter, they would carry out without hesitation their second mission, which would not be for defence for sure. To this end, it set the task of developing another type of ICBM system whose main mission is rapid nuclear counterstrike, and advanced an epochal strategy for the development of nuclear forces and national defence capability in

2023 with an exponential increase of the country’s nuclear arsenal as the main orientation. It tasked the National Aerospace Development Administration with launching the first military satellite of the DPRK at the earliest date possible by pushing ahead with the full preparation for a reconnaissance satellite and its launch vehicle which is in progress at the final stage. It set forth major tasks for boosting the political and ideological, military and technical strength of the Korean People’s Army, the main force of national defence.

As the structure of international relations has definitely moved to a “new Cold War” system and the trend of multi-polarization is accelerating, the meeting stressed the principles of external work to be thoroughly adhered to by the WPK and the DPRK government to raise the national prestige, defend the national rights, safeguard the national interests and protect regional peace and security. In particular, it put forward the detailed orientation of responding to the United States and other enemies–switching to the actual action of more reliably and surely cementing the nation’s physical forces on the principle of power for power and head-on contest–and warned those countries which started joining in the US partnership strategy to deprive the DPRK of its sacred dignity and sovereignty.

All these decisions and tasks represent the staunch standpoint of the WPK and the government of the DPRK which prize the dignity and sovereignty of the state and the safety of the people more than anything else and give top and absolute priority to them.

The year 2023 will see how the DPRK puts its plans and decisions into reality according to the timetable it has set. 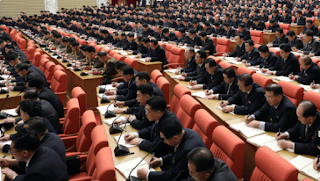 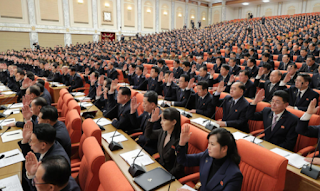