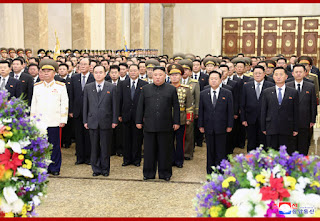 Pyongyang, February 17 (KCNA) — Kim Jong Un, general secretary of the Workers’ Party of Korea (WPK) and president of the State Affairs of the Democratic People’s Republic of Korea (DPRK), visited the Kumsusan Palace of the Sun on Feb 16, the Day of the Shining Star, the greatest auspicious holiday of the nation.

The Kumsusan Palace of the Sun was wrapped in the sublime atmosphere amid the deep yearning for Chairman Kim Jong Il who lived the life of total dedication to the people unprecedented in history, regarding “The People Are God” as his motto.

Placed at the statues of President Kim Il Sung and Chairman Kim Jong Il was a floral basket in the name of the respected Comrade Kim Jong Un.

Also laid were floral baskets in the names of the WPK Central Committee, the State Affairs Commission of the DPRK, the Standing Committee of the Supreme People’s Assembly of the DPRK and the Cabinet of the DPRK.

The General Secretary, together with the participants, paid high tribute to the statues of Kim Il Sung and Kim Jong Il.

At the hall where Kim Jong Il lies in state, the General Secretary made a bow in the humblest reverence to him who glorified the country into a genuine socialist state centered on the popular masses and provided the firm foundation of prosperity by dint of self-reliance with his outstanding idea and revolutionary leadership day and night.

The members of the Party central leadership organ made the firm resolution to remain loyal to the revolutionary idea and leadership of the General Secretary firmly united around him and fulfill their heavy duty entrusted by the times and history in implementing the important tasks set forth at the 8th Congress of the WPK and the 2nd Plenary Meeting of the 8th Central Committee of the WPK and thus achieve the overall development of our own-style socialism. -0