Self-supporting Economy–Lifeline of the DPRK 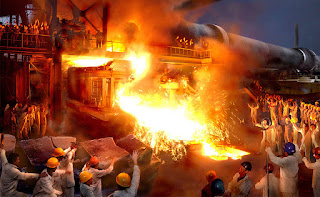 From the outset since its founding the Democratic People’s Republic of Korea has advocated the building of a self-supporting national economy, and is still regarding the self-supporting economy as its lifeline.

The Korean war in the 1950s devastated the economy of the DPRK to the hilt. The US imperialists asserted that the DPRK would be unable to rise up from the debris even in a hundred years.

However, the DPRK healed the wound of war in a short span of time and advanced forward to the building of socialism developing heavy industry on a preferential basis while promoting light industry and agriculture simultaneously. At that time, the great-power chauvinists, displeased with its construction of self-supporting national economy, forced it to join the Council for Mutual Economic Assistance. And they even suspended the delivery of iron and steel, machinery and equipment they had contracted with it to send. The DPRK found itself at a crossroads–yielding to the pressure of the great-power chauvinists and receiving machinery and equipment from them while sending them raw materials or defending its sovereignty without doing so.

At this juncture Premier Kim Il Sung (1912–1994) visited the then Kangson Steel Plant. Saying to the workers that if they produced 10 000 tons of more steel materials, the country would greatly be relieved, he called on them to increase production. True to his call, the workers turned out 120 000 tons of steel billets with a blooming mill with the annual rated capacity of 60 000 tons. And the workers of the then Kim Chaek Iron Works produced 270 000 tons of pig iron with a 190 000 ton-capacity blast furnace.

In the course of laying foundations of the self-supporting economy one by one,

the country manufactured modern machinery and equipment including tractor, automobile, bulldozer, excavator, 8-metre turning lathe and 3 000-ton press. From 1957 to 1960 the total industrial output value increased by 3.5 times. From 1957 to 1970 the industrial production grew at a high speed of 19.1% every year on average, turning it into a developed socialist industrial state in a short span of 14 years. From 1970 to 1979 the industrial production grew at a speed of annual average of 15.9%. The success it achieved in the economic construction aroused world admiration and remarkably raised its profile.

After the 1980s, the self-supporting economy of the country developed into a powerful one which could easily perform such huge economic tasks as manufacturing a 10 000-ton press and constructing the world-famous West Sea Barrage by crossing a 8-km-long rough sea.

As socialism collapsed in the former Soviet Union and other Eastern European countries in succession and the moves of the imperialists to isolate and suffocate the DPRK became more and more blatant, the DPRK’s economy underwent ordeals.

The imperialists enforced comprehensive economic sanctions and blockade against it on various pretexts in an attempt to crush the country which remained the sole bulwark of socialism. Analysts judged that socialism would perish in the DPRK within three days, three months or three years.

However, the economy of the DPRK did not collapse at all.

In order to make the nation’s economy more modern and independent, Chairman Kim Jong Il (1942-2011) led the country to direct great efforts to the development of iron, fibre and power industries which relied on CNC technology and domestically-available raw materials. Under his wise leadership, many machine-building factories and light industry factories fitted with CNC equipment and automated production lines sprang up in the country. And modern iron- and steel-making and fibre production lines based on the raw materials abundant in the country were established.

Meanwhile, large and medium- and small-sized hydropower stations were built across the country, laying a firm foundation for increasing power production. Along with this, the country achieved an astonishing success of manufacturing and

launching man-made earth satellites by its own efforts. Amid hard trials, it realigned the farmland of the whole country into large standardized plots and constructed gravitational waterways, thus radically increasing the agricultural production potential.

Despite difficulties it did not ask others to help it, but rather it further consolidated the might of its self-supporting economy and defended its sovereignty and socialism.

Kim Jong Un, President of the State Affairs of the DPRK, believes that only when his country further consolidates its economic power on the principle of self-reliance, can it defend the dignity of the state and people and dash forward more quickly towards the chosen target. At major occasions such as the Seventh and Eighth congresses of the Workers’ Party of Korea he clarified the ways and methods for strengthening the might of the self-supporting economy under the unfurled banner of self-reliance.

Today the DPRK is conducting the work of further intensifying the self-sufficiency of the many-sided and comprehensive economy by readjusting and reinforcing its economy in the period of the five-year plan of the national economic development (2021-2025). Metal, chemical and other basic industrial sectors are dynamically propelling the work of further completing and expanding iron production system relying on domestic raw and other materials scientifically and technologically, while establishing C1 chemical industry and strengthening the self-sufficiency of fibre industry. Successes are being made in the work of turning the machine-building industry into development- and creation-oriented one. Rural construction to facelift the appearance of the rural communities is being pushed ahead with true to the new programme of rural rejuvenation.

Building every factory and production line on such a high level as to make them look no inferior even in the distant future–this is the aspect of the self-supporting economy of the DPRK which is steadily consolidated.

It is the general orientation of the self-supporting economy of the DPRK to reliably guarantee the prosperity of the nation and improvement of the people’s life even though the hostile forces’ economic blockade and sanctions last 10, nay, 100  years or worldwide economic upheavals come