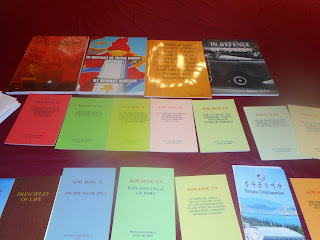 UK KFA held its first Manchester meeting,on the 12th of March , for 10 years with the aim of starting a new KFA branch for the Manchester area. The meeting was held despite the Quakers banned KFA from their meeting room.
The meeting was chaired by Daniel Giblin of the new KFA Manchester branch and addressed by Dermot Hudson , UK KFA chairman.
Dermot Hudson made reference to the recent DPRK-US summit pointing out that the blame was solely on the US . Marshal Kim Jong Un had taken a decisive step for peace by holding the summit with the US president and showed courage by negotiating directly with the US . Dermot explained what KFA is and spoke about his visits to the DPRK including the most recent one in February . He said how impressed he was the single hearted unity of the DPRK . Everyone in the DPRK has a stake in society and considers themselves part of society , this was evidenced by the way the problem of sudden snowfall was dealt by DPRK workers . Dernot pointed out that the DPRK hast independent national economy based on self-reliance which means that the DPRK can withstand sanctions. Dermot also spoke about his visit to an eye hospital and a Kimchi factory .
There was lively discussion afterwards with many interesting questions and others in the audience who had been to the DPRK . It was resolved to hold quarterly meetings of KFA in Manchester and to have cultural activities. Our thanks to KFA Manchester for organising this