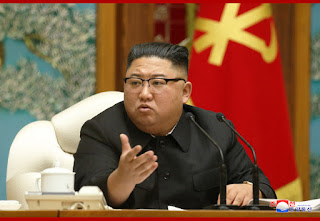 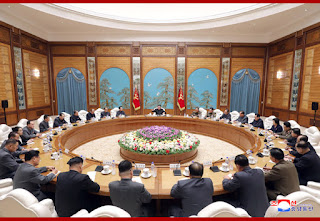 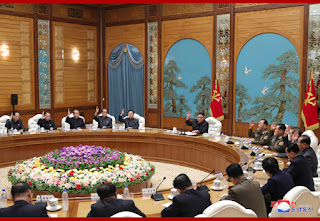 Kim Jong Un, chairman of the Workers’ Party of Korea, chairman of the State Affairs Commission of the Democratic People’s Republic of Korea (DPRK) and supreme commander of the armed forces of the DPRK, was present at the meeting.

Present there as observers in the video conference system were officials of relevant departments of the WPK Central Committee, chairpersons of the provincial Party committees, minister of Public Security, the director of the Central Public Prosecutors Office and the members of the state emergency anti-epidemic sector.

Upon authorization of the Political Bureau of the C.C., WPK, Supreme Leader of the Party, state and armed forces Kim Jong Un presided over the meeting.

The meeting discussed in depth the issue of further tightening the state emergency anti-epidemic system in the face of the ever-worsening worldwide health crisis.

The Supreme Leader analyzed and assessed the serious worldwide spread of COVID-19 and the state anti-epidemic situation and clarified the tasks for the Party, military and economic fields to further tighten the emergency anti-epidemic front, the major front of the 80-day campaign, and ways for doing so. He also stressed the need to keep a high alert, build a tight blocking wall and further intensify the anti-epidemic work, being aware of the important responsibility for the security of the state and the well-being of the people.

The meeting reported the analysis of non-socialist practices in educational organizations and in society as a whole, and seriously discussed the issues to decisively root them out.

Sharply criticized at the meeting were the Party committee of Pyongyang University of Medicine which committed a serious crime, and the irresponsibility and extreme dereliction of duty of relevant departments of the Central Committee of the WPK, judicial and procuratorial organs and security organizations which shielded, connived and fostered the crime by failing to tighten the Party guidance over the university and by failing to strengthen the system of handling complaints, legal monitoring and control.

The enlarged meeting of the Political Bureau emphasized the need to awaken the Party organizations at all levels once again and wage a fierce Party-wide struggle to root out practices against the Party, the people and socialism and the need for the law enforcement organs, in particular, to upgrade the law enforcement so as to make sure that beautiful socialist traits are maintained in the overall socio-political, economic and moral life.

The Political Bureau of the Party Central Committee made deep study and discussion of agenda items referred to it and set forth important tasks and adopted relevant decisions with unanimous approval. -0-