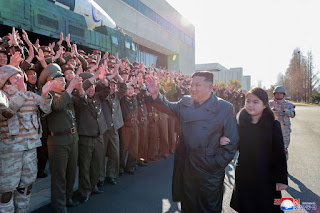 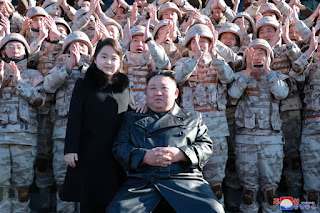 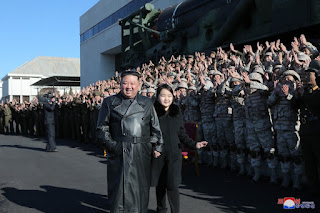 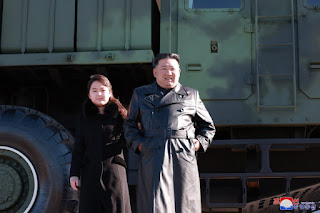 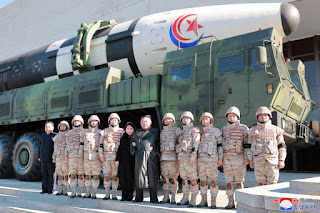 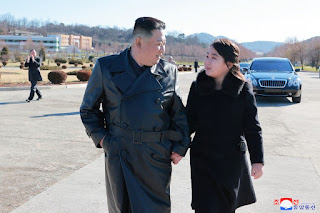 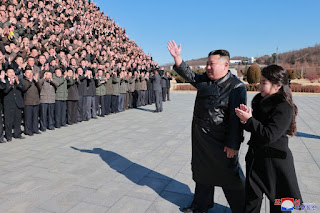 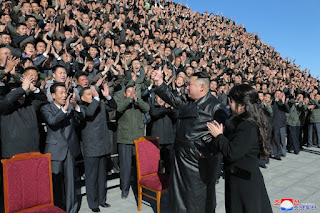 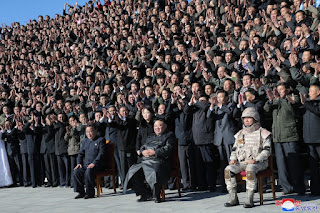 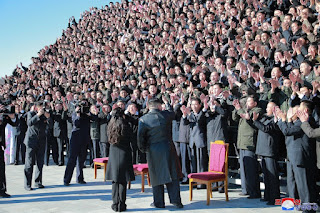 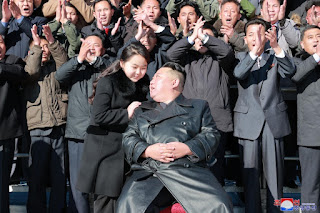 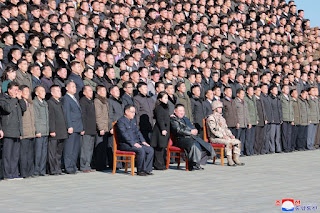 Pyongyang, November 27 (KCNA) — Kim Jong Un, general secretary of the Workers’ Party of Korea and president of the State Affairs of the Democratic People’s Republic of Korea, had a photo session with the contributors to the successful test-fire of new-type ICBM Hwasongpho-17.

Present there were Kim Jong Sik and Jang Chang Ha.

The respected Comrade Kim Jong Un met with the combatants of the Red Flag Company, the officials, scientists and technicians of the defence science research institute and workers of the munitions factory who made a great contribution to the test-fire of Hwasongpho-17 conducted on November 18, and had a photo session of historic significance with them.

The participants were filled with boundless passion and happiness of receiving undeserved glory and fortune again amid the pleasure and pride over the fact that the rapidly increasing tremendous abilities of the DPRK was strikingly displayed and the strategic and absolute strength of great and dignified Korea was demonstrated to the whole world in the course of the dynamic advance for the Party’s far-reaching cause of building a military power.

When General Secretary Kim Jong Un appeared at the photo session venue together with his beloved daughter, all the participants broke into stormy cheers of “Hurrah!”, expressing the highest glory and ardent reverence for him, the outstanding leader of our Party, state and people who personally blazed a perfect shortcut to the national defence development of our style with his wisest determination and prominent leadership ability and energetically guided it to reliably defend the brilliant dignity of our Republic with the gigantic event, the completion of the world’s strongest strategic weapon.

The General Secretary gave a warm and militant salute of congratulations to the reliable defence soldiers who proudly launched before the world a gigantic crystal made with pure loyalty, extraordinary mental power and outstanding sci-tech force in the struggle for attaining the grand goal true to the Party’s line of building up the national defence and thus convinced of our daily-growing military supremacy and powerfully demonstrated to the whole world the great might of our nuclear war deterrent.

Saying that he is very grateful to our loyal and patriotic people who have endured all sorts of hardships and rendered absolute support to the cause of the Party whenever its far-reaching great cause of building a powerful army was achieved one by one, he stressed that Hwasongpho-17, an outcome of the people’s unconditional support and encouragement, is just a gigantic creation brought by our people with their own efforts, a great entity of strategic strength and the Korean people’s Hwasongpho both in name and reality.

He extended warm thanks to the people who absolutely sympathized with, upheld, encouraged and supported the revolutionary cause of our Party and convinced and prayed for its endless success as usual.

It is the truth taught by history that only when we become the strongest, not the weak, in the present world where the strength in showdown just decides victory, can we defend the present and future of the country and nation, he said, adding that we should consolidate our greatest strength seized firmly with two hands as more absolute and irreversible one, never resting on our laurels, and continue to put spurs to the limitless bolstering of the defence capabilities.

He said with confidence that our self-defence capability would be put on the position of the world’s strongest as long as our fighting goal and determination are clear and there are a large army of defence scientists and technologists intensely loyal to the Party and the courageous munitions workers and the absolute support of our people.

He expressed the expectation and belief that our scientists and technicians in the field of national defence and the workers in the field of munitions industry, who have always been boundlessly loyal to their cause, would make a do-or-die struggle in the spirit of unconditional implementation, always mindful of their heavy mission in the advance for achieving the cause of building the state nuclear force in the future, too, and thus expand and bolster up the nuclear war deterrent of the country at an exceptionally rapid speed.

All the participants, who received the great trust and unimaginable glory of the General Secretary, expressed their deep gratitude to him who repeatedly bestowed on them the privileges envied by the whole country and instilled full confidence in the bright future of building the Juche-based national defence. And they hardened their resolve to reliably carry forward our great cause of building the state strategic force for all ages, burning their hearts with a single mind to repay the privileges and trust shown by him at any cost. -0-