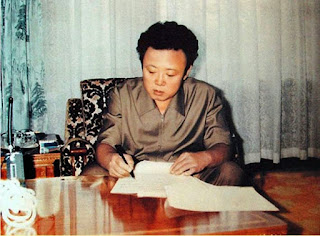 “Expect no change from me”. So said Comrade Kim Jong Il at a time when the imperialist world was talking of the possibility of ‘reform and opening up’ taking place in People’s Korea, when the revisionist socialist countries had submitted to capitalist barbarity and their achievements torn up in the face of an onslaught of shock privatisations, unemployment, increasing homelessness and despair. The working classes of Eastern Europe and Russia were finding out the hard way how neoliberalism imposes itself. Comrade Kim Jong Il ensured that Korea continued down the victorious road of socialist construction and wisely made no apologies for it, elucidating his views in numerous important works, from On the Juche Idea in 1982 and, more extensively, in his 1994 treatise Socialism Is A Science – an essential work for defending the gains of socialism and showing how the Juche and Songun ideas have safeguarded the Korean revolution against the betrayals that occurred elsewhere, an analysis anyone who wants a better world should read. He inherited the noble cause of Kim Il Sung and carried it through, attacking all forms of flunkeyism and dogmatism (not enough socialist leaders have recognised how damaging these traits can be), frustrating the plans of US imperialism to stifle and strangle the DPRK and built a strong, prosperous socialist country that survives to this day as an example to progressives and revolutionaries throughout the world. For this he was demonised by the imperialist world throughout his lifetime, and each one tried to outdo each other for how cheap, racist and low they could go in their attacks. But as he also received 401 decorations, medals and honorary titles from foreign countries throughout his lifetime, many of which can be seen in the International Friendship Exhibition, it’s unlikely the attacks of these lesser men made any difference.
Kim Jong Il  was  born  as the son  of  President  Kim Il Sung  and the  anti-Japanese  war  heroine Kim Jong Suk at the Paektusan Secret Camp on February 16, 1942. He came from a revolutionary family of patriots that also included his great-great-grandfather Kim Ung U, who performed great feats in the sinking of the US merchant ship General Sherman. His grandmother Kang Pan Sok fought for the emancipation of women and for Korea’s liberation. His granduncle Kim Hyong Gwon, his uncle Kim Chol Ju, and maternal uncles Kim Ki Jun and Kim Ki Song threw themselves in the anti-Japanese revolutionary struggle and dedicated their lives to the cause of national liberation. But it was his father Kim Il Sung who became the liberator of Korea, first from Japanese colonialism and then from US-led imperialism, who forged the Korean revolution into a communist proletarian revolution under the Juche and Songun ideas that ensure Korea would remain independent and rely on itself for its own self-defense. The division of Korea has caused great suffering for Koreans, and Kim Jong Il upheld Kim Il Sung’s instructions to work hard for national reunification and the expulsion of all imperialist troops from the Korean peninsula, the only way to guarantee peace and independence.
Throughout his childhood and student years he taught his compatriots the works of his father – organising a study group for the biography of Kim Il Sung – and worked to establish Juche amongst his rising generation. He later accompanied his father on trips around the country, observing his guidance of the revolution and construction. He attended Kim Il Sung University and was admitted to the Workers’ Party of Korea (WPK) on July 22, 1961, later appointed an officer of the WPK Central Committee in June 1964 and successively held the posts of section chief, deputy department director and department director of the WPK CC, before being elected member of the WPK CC at the Fifth Plenary Meeting of the Fifth WPK CC in October 1972, and secretary of the WPK CC at the Seventh Plenary Meeting of the Fifth WPK CC in September 1973. The army and people of the DPRK held Kim Jong Il in high esteem as the eternal General Secretary of the WPK and the eternal Chairman of the DPRK National Defence Commission at the Fourth Conference of the WPK in April 2012 and at the Fifth Session of the 12th SPA in April 2012, respectively.
It’s worth quoting from his excellent treatise Socialism is a Science, mentioned earlier, on a subject that the western media often berated him for. He gives an unarguable response:
“The “human rights” advertised by the imperialists are privileges of the rich, privileges to do anything on the strength of money. The imperialists do not recognize the right of unemployed people to work, or the right of orphans or people without support to eat and survive, for instance, as human rights. As they do not grant working people elementary rights to existence and as they pursue anti-popular policies and policies of racial and national discrimination and colonialism, the imperialists have no right to speak about human rights.”
As well as his revolutionary activities, his writings stretch to many volumes, covering subjects from politics to architecture, cinema, opera and music. It was his last wishes that the whole of society be modelled on the Juche Idea and Korea firmly stay on the course of genuine socialist construction. This has been taken up by his successor, Marshal Kim Jong Un, who has declared the whole of society will be modelled on the principles of Kimilsungism-Kimjongilism. It is under this banner that we followers of the DPRK will march under today, and more proudly than ever. We mourn the passing of Comrade Kim Jong Il, but know his immortal contributions will live forever in the hearts and minds of all revolutionaries and communists.
LONG LIVE PEOPLE’S KOREA!
LONG LIVE GENERAL KIM JONG IL!
LONG LIVE THE JUCHE AND SONGUN IDEAS! MANSE!