Skip to content
DPRK, a Tax-Free Country
Today, many countries are advocating an “advanced state” and a “welfare state”.
They are collecting taxes from the people under different pretexts, whose kinds are on the increase. After all, greater burdens are imposed on the people as the days go by.
But there is the only tax-free country on the earth. It is the Democratic People’s Republic of Korea centred on the people.

These pictures show the then working people wrapped in joy upon the news of the historic law “On Completely Abolishing the Taxation System” which was adopted at the Third Session of the Fifth Supreme People’s Assembly of the DPRK on March 21, 1974.
The work to establish a popular and democratic tax system in the DPRK was actively done after liberation from tens of-year-long colonial rule of the Japanese imperialists in 1945.
Afterwards, as the foundation of the independent national economy was laid, the DPRK government powerfully pushed forward the work to systemically relieve the people of their tax burdens and thus completely abolished the system of the agricultural tax in kind between 1964 and 1966. So the income tax and the rates of local autonomy alone remained in Korea, which were, in fact, trifling in the state budgetary revenue.
Some years later, the law on completely abolishing the taxation system was adopted for the first time in history. 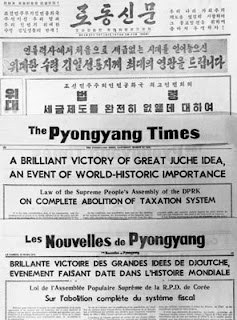