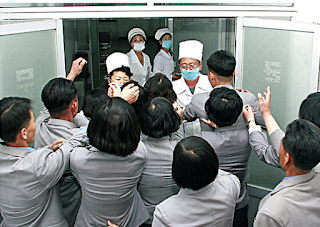 Twenty-one people including 19 children were reported to have been killed in a gun-related violence at a primary school of Texas in the United States on May 24 last. Earlier, on May 19, there was an exchange of fire following a quarrel among teenagers in downtown Chicago, leaving two killed and eight others wounded.

In the meantime, completely contrary things happened in the Democratic People’s Republic of Korea. The country moved to the highest-level emergency anti-epidemic system after the malignant virus COVID-19 entered its territory. Many officials, working people and even students and children voluntarily donated food grains, money and medicines to families in difficult conditions. Such beautiful deeds of helping one another are commonplace in the DPRK.

In late 2020, two workers who had been badly burned in an accident were taken to the Hamhung City Hospital in the eastern part of the country. On hearing that skin grafting operations would be conducted, their relatives and colleagues rushed to the hospital. But they were late. Thirty-three doctors and nurses of the hospital had already grafted patches of their skin to the patients. None of them had known the two patients’ names or met them before.

In this country, if a mishap happens to someone, their neighbours, colleagues and even those who have never met them willingly help them. This is a trait of the Korean society.

This trait had already formed and spread across the country in what the Korean people call the Chollima era in the mid-20th century. The workers of a workteam in the then Kangson Steel Plant sincerely helped those who were lagging behind, in the course of which they brought about collective innovations, thus turning out 120 000 tons of rolled steel with a blooming mill with the annual rated capacity of 60 000 tons.

A woman worker of the then Pyongyang Silk Mill bestowed warm affection and tenderness on her fellow women workers who had poor skills to bring them up into skilled workers and labour innovators. She moved to other workteams three times so as to turn those that were lagging behind, into leading ones.

These examples rapidly spread across society, helping the people to understand that a beautiful and noble life is one which is dedicated to society and the collective and leading them to live such a life. The slogan which was most prevalent among the people in the era was “One for all and all for one!”

Thanks to the ruling Workers’ Party of Korea’s policy of putting forward those who display the ennobling mental and moral traits for society and the collective, the trait could be continued one century into the next.

The WPK set the transformation of man, nature and society as an important

goal in building socialism. It is a consistent policy of the WPK to educate and lead those who lag behind and cause trouble, and make all the people live harmoniously and become patriots who devote themselves to the prosperity of the country.

This policy has been translated into reality, in the course of which many examples have been created. An unmarried young woman is looking after several orphans and numerous young people have volunteered to work in difficult and challenging sectors away from their homes.

Such deeds were found when the highest-level emergency anti-epidemic system was put in place in the country. Many doctors and nurses visited the households and patients under their charge before their ill children and husbands. Workers and officials of many factories worked day and night to send medicines and foodstuffs to the people who were suffering from the malignant disease. Some people disposed of their family property to prepare goods needed by those in hostels, students’ dormitories, orphanages and baby homes; and still some others selflessly shared their food grain, subsidiary foodstuffs and daily necessities with families and neighbours in need.

This can never be imagined in the capitalist society in which everyone cares nothing but themselves.

The society in which all people form an integrated whole and live with affection and love for others–this is the socialist society of the Korean style, which the Western media describes as a “human rights desert” and “hell.”