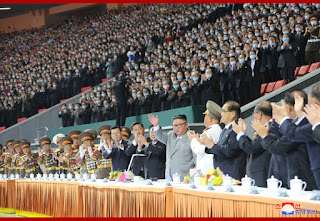 Pyongyang, October 12 (KCNA) — The grand mass gymnastics and artistic performance “Great Guidance” took place at the May Day Stadium on Oct. 11 in celebration of the 75th anniversary of the founding of the Workers’ Party of Korea (WPK).

Kim Jong Un, chairman of the Workers’ Party of Korea, chairman of the State Affairs Commission of the Democratic People’s Republic of Korea (DPRK) and supreme commander of the armed forces of the DPRK, appreciated it.

The moment the Supreme Leader of the Party, state and armed forces appeared on the grandstand, all the performers and the audience broke into stormy cheers of hurrah.

He waved to his beloved people.

He was presented with bouquets by children.

Amid the song “Our National Flag”, the national flag of the DPRK and the flag of the WPK were hoisted.

The performers gave such numbers as “The Workers’ Party Is Our Guide”, “Along the Road of Socialism” and “We Have the Great Party”.

Among the audience were Choe Ryong Hae, Ri Pyong Chol, Kim Tok Hun and Pak Pong Ju, members of the Presidium of the Political Bureau of the Central Committee of the WPK, senior officials of the Party, government and military, the delegates to the celebrations of the 75th anniversary of the founding of the WPK, the participants in the military parade, viewers and Pyongyang citizens. -0-