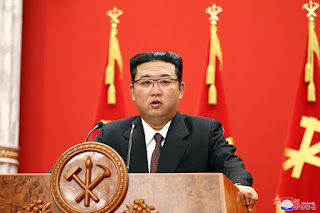 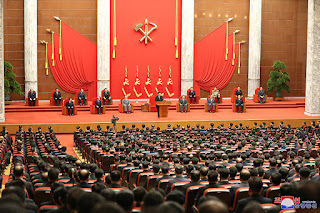 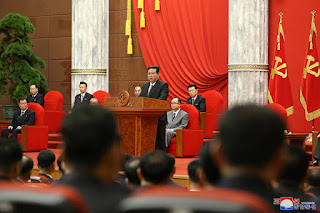 Pyongyang, October 11 (KCNA) — All the Party members and other people significantly celebrate the founding anniversary of the ever-victorious Workers’ Party of Korea (WPK) in a militant journey for ushering in a new era of our great state-first principle and a powerful and prosperous country while accelerating the advance of the revolution under the experienced and tested guidance of the invincible WPK.

Kim Jong Un, general secretary of the Workers’ Party of Korea, took part in the lecture.

When the respected General Secretary Kim Jong Un came out to the venue of the lecture, all the participants broke into thunderous cheers of “Hurrah!” as a token of their reverence for the General Secretary, the great dignity, symbol and representative of our Party, state and people who confidently leads our Party and people along the road of the Juche-oriented revolution and to the future of communism with his gifted wisdom, extraordinary penetration and distinguished leadership.

Attending the lecture were Jo Yong Won and Pak Jong Chon, members of the Presidium of the Political Bureau and secretaries of the WPK Central Committee.

Political workers of the armed forces organs including Kwon Yong Jin, director of the General Political Bureau of the Korean People’s Army, also participated in the lecture.

Kim Jong Un, general secretary of the WPK, made a historic speech “Let Us Further Improve Party Work in Line with the Demands of the Period of Fresh Development of Socialist Construction”.

All the participants courteously and attentively listened to the speech of the General Secretary comprehensively dealing with the 76-year-long history of the great WPK which performed the immortal exploits to shine long before the country, the people, the times and history while vigorously leading the unprecedented arduous and complicated Korean revolution along the road of victory, and indicating the principled matters and practical ways for further strengthening the Party organizationally and ideologically as a powerful political staff of the revolution and for thoroughly applying the people-first principle in the overall Party work.

When the respected General Secretary ended his speech, all the participants broke into cheers of “Hurrah!” that shook the venue.

The participants extended the highest respect to the respected General Secretary who is making indefatigable thinking and efforts to bring about drastic development of socialist construction and turn the people’s desire and wish into a great reality by markedly enhancing the leadership prestige and the fighting efficiency of the WPK.

All the senior Party officials who participated in the lecture to commemorate the 76th founding anniversary of the WPK hardened their conviction in the greatness of our Party and victory of the revolutionary cause and made firm pledge to discharge their heavy responsibility and duty in the struggle for thoroughly implementing the decisions made at the historic 8th Congress of the Party and the administrative policy of the government of the Republic. -0-