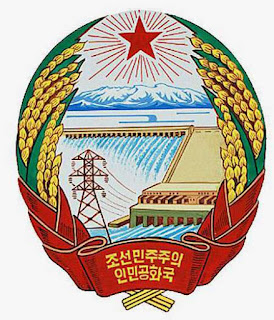 The emblem, instituted with the founding of the DPRK in September Juche 37 1948), gives a graphic image of the country.

Mt Paektu (2 750m) portrayed in the national emblem is the highest mountain in Korea, and it is regarded by the Korean nation as their ancestral mountain. What is more important is the fact that an armed struggle was waged centring around the mountain to liberate the country from the Japanese imperialist occupation (1905-1945). Created during the armed struggle led by Kim Il Sung (1912-1994) were the spirit of thoroughgoing independence, self-reliance and fortitude, the experience and exploits in the building of a party, state and armed forces, and the method and style of work of trusting the masses and enlisting their strength. Mt Paektu in the national emblem depicts the will of the Korean people to carry forward the traditions of the anti-Japanese revolutionary struggle. Today the DPRK is recognized as a country with a strong spirit of independence and is advancing vigorously, repulsing the challenges and blockade of the outside forces in the spirit of self-reliance−it is because the country has carried forward the traditions of Mt Paektu.

Unity, Foundation of Existence of a Country

The red ribbon portrayed in the national emblem stands for the unity of the Korean people. Unity constitutes a foundation of all the state activities. All the successes and victories it has achieved in the face of the tenacious challenges and moves by the hostile forces to isolate and stifle it are inconceivable separated from the steel-like unity of the Korean society. The single-hearted unity of the leader, the Party and the masses, an ideal at the time of the founding of the state, has now been raised to a new high under the leadership of Kim Jong Un, Chairman of the State Affairs Commission.

Symbol of Development of Self-supporting Economy

The hydroelectric power station depicted in the emblem is symbolic of Korea’s modern industry based on heavy industry. Among more than 200 countries in the world, the DPRK is the only country which depicted a symbol of electrification in its national emblem. The ears of rice portrayed in the emblem represent the bright prospect of socialist agriculture of the DPRK.