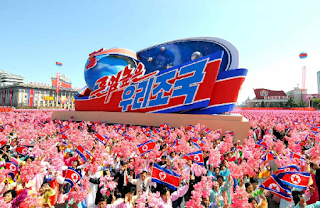 The 72nd founding anniversary of the DPRK is near at a time when the dignity and prestige of the DPRK led by Supreme Leader Kim Jong Un are fully demonstrated throughout the world.

The DPRK founded on September 9, Juche 37 (1948) by President Kim Il Sung has created epoch-making changes and miracles in the building of a socialist power under the judicious leadership of the peerless great leaders.

The President built the DPRK a socialist ideal one that is independent in politics, self-supporting in the economy and self-reliant in defense with his warm love for his people and tireless leadership.

Chairman Kim Jong Il firmly defended the dignity and sovereignty of the nation and turned the DPRK as the powerful fortress for the national prosperity and the realization of the independent reunification with his outstanding guidance, true to the President’s idea and line of building of the state.

The DPRK, precious heritage left by the President and the Chairman, enjoys the greatest heyday of its development under the leadership of Supreme Leader Kim Jong Un.

The Supreme Leader, with the noble mission to add brilliance to the idea of state building and exploits of the preceding leaders for ages, put the DPRK on the position of powerful politico-ideological, military and economic potentials which no enemy dares provoke with his matchless pluck, firm resolve and rare political acumen.

The DPRK evokes world-wide admiration for its heroic deeds in the building of a socialist power on the strength of single-hearted mind, military muscle, self-development, science and technology in the face of inhuman and coldhearted sanctions of the imperialists.

The south Korean people and Juche idea followers of the world speak highly of the DPRK which is led by the Supreme Leader as the beacon of hope for the world progressives.