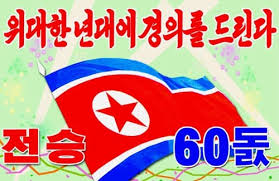 Seeing the recent celebration in Pyongyang of the 67th anniversary of the great Fatherland Liberation War in the DPRK and talking to an old friend made me recollect my trip to People’s Korea in July 2013 for the magnificent celebrations of the 60th anniversary of the victory in the Fatherland Liberation War .
I traveled to the DPRK via Beijing . I had a complicated journey firstly Heathrow to Berlin Tegel on British Airways , then Berlin to Beijing on Hainan airways . I had a one night stop over in Beijing at the Capital Airport hotel .
Together with the other international delegates I arrived in Pyongyang July 23rd . I was greeted at the airport by my guide for the visit Mrs Kim Un OK secretary general of the Korean Committee for Friendship with the British People and desk officer of the Europe Dept of the Korean Committee for Cultural Relations with Foreign Countries.
Many delegations thronged to Pyongyang for the celebrations . Notably KFA President Alejandro Cao De Benos led a big delegation of KFA International and KFA Spain . There was also a Spanish Communist Youth delegation which included KFA members. My good friend Martin Lotscher from KFA Switzerland was there . Also a famous Russian woman writer who lives in Ireland and is a KFA member was there . There were many friendship and solidarity organisations present as well different communist and workers parties . Ramsey Clark the former US attorney general and peace campaigner was there . Of course not everyone there was a real friend of the DPRK ; there were dodgy elements like Choson Exchange who are basically a spy outfit aiming to restore capitalism in the DPRK and also a huge horde of Western capitalist journalists .
We stayed in the Yanggakaddo hotel which has 43 floors and is situated on an island on the River Taedong. The rooms command a birds eye of Pyongyang city and there is an excellent revolving restaurant which serves the most delicious food. On the ground floor there was several restaurants and a number of shops that sell DPRK made products .
The weather was boiling hot . I remember the sweat literally pouring out of my body like a stream . It proved to be too much for the bloke from Thompson Reuters who was overcome by the heat at the big Military parade .

The military parade for 60th V Day was truly out of this world . DPRK military parades are always good . With this one the helicopters actually flew along the approach roads to KIM IL SUNG square and then swooped over the square , amazing . The colours were bright . I remember a friendly boy student from the Pyongyang University of Foreign Studies kindly lent me his handkerchief to put on my head . Later in the trip I had a long talk with him about the abdication of Edward the 7th .
On July 27th Victory day we enjoyed a special lunch in the revolving restaurant at the top of the hotel . You could actually see the military vehicles for the parade lining the streets of Pyongyang . 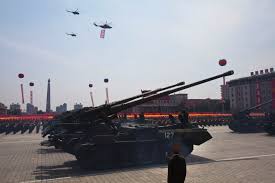 I also remember the grand opening ceremony for the new Victorious Fatherland Liberation War Museum . Respected Marshal KIM JONG UN opened the museum . When we inside it was incredible to see . Also they were serving free cold drinks .In the evening there was a spectacular firework display the like of which I had never seen before . Afterwards we were treated to a great banquet .
It was not all banquets , parades and ceremonies . We participated in practical solidarity actions . There was a big International Peace March . This started with a rally at the monument to the Three Charters for Reunification . We marched with banner and then got on coaches to go to Kaesong . We stopped at the excellent motorway service station . Here I suddenly heard a plummy English voice behind and it was the late Stuart Munro of the Revolutionary Communist Party of Britain ML ( there were a total of 3 UK delegations ; UK KFA , RCPBML and CPGBML ) . At Kaesong we went to Panmunjom and then in the afternoon we marched through the streets of Kaesong . The young women of the Korean Committee for Cultural Relations with Foreign Countries carried our UK KFA banner through the streets . I felt proud . Then there was a mass rally of about 10,000 people at which I was one of the speakers . It was incredible . 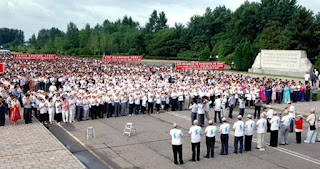 We also went to Sinchon , the place where the Yank imperialists slaughtered 35,383 people . There was a mass rally by the tombs of the women and children who were killed by the Americans .Comrade Alejandro made a speech here .
I met many old friends such as comrade Alejandro and other KFA activists such as Martin Lotscher . Alejandro has a great sense of humour and his witty observations made me laugh . I was able to meet comrade Zo Il Min the head of the Pyongyang Mission of the Anti-Imperialist National Democratic Front of south Korea . Also myself and another KFA member met an old mutual friend who used to work a DPRK foreign trade organisation in Beijing ‘
Such warm and unforgettable memories !
I am sure that the DPRK will splendidly celebrate the 70th anniversary of the victory in the Fatherland Liberation War on grand scale and hope UK KFA can send a big delegation.
Dr Dermot Hudson
UK Korean Friendship Association
British Group for the Study of the Juche Idea
Association for the Study of Songun Politics U