The 19th KFA International Meeting on the theme -PRESIDENT KIM IL SUNG A GREAT LEADER WHO TOOK CARE OF PEOPLE”S LIVES” was held in Copenhagen , Denmark on the 16th of November.

Despite cold and rainy weather delegates were in a high spirited mood. The meeting was attended by delegations from the UK , Denmark , Greece , Germany , Switzerland,Spain and Romania . Some people could not attend the meeting due to travel difficulties . KFA President comrade Alejandro Cao De Benos was shamefully prevented from attending the meeting due to the travel ban imposed on him by the reactionary fascist Spanish authorities at the behest of the CIA and US imperialism , where is the freedom of movement ad freedom of speech that anti-DPRK liberals like to talk about him. 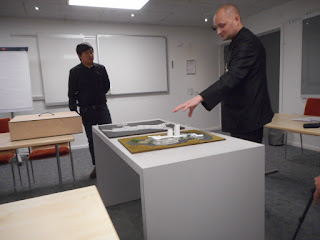 The meeting opened with the rousing  anthem of the KFA , the ‘Song of National Defence ” and
was presided over by comrade Mana Sampak , KFA International Organisation Secretary and comrade Ulrich Larsen KFA Official Delegate for Scandinavia . Comrade Ulrich welcomed us to Copenhagen. He said that KFA is at war and that KFA is the intellectual shield of the DPRK . Comrade Alejandro Cao De Benos in his speech that was read out to the meeting said ” First of all I thank you for gathering here today and accept my apologies because my passport is still retained by the abuse of the Spanish court and I cannot join you on this special occasion. President Kim Il Sung is the example that a human being can do supernatural things. That the will for liberation and love to the people can overcome any obstacle and enemy, no matter how big it is.”
Trever Artiz KFA International Commissar in his contribution to the meeting said that ‘the red flag is flying high in Juche Korea under the leadership of respected Marshal KIM JONG UN ‘ Comrade Perikilis K Official Delegate of KFA Greece said “With the flame of Juche, President KIM IL SUNG received debris and delivered modern states with endless comforts for the people. Who has the opportunity to visit a modern and fully equipped pool at no charge or very cheaply at any time and enjoy swimming? Which citizen enjoys free holidays in luxury beachfront apartments? Which citizen pays nothing for his child’s education? Which citizen does not pay taxes? Only the sophisticated man of Juche enjoys these privileges that he has chosen to provide to himself through a long battle with imperialism and reaction.” Martin Lotscher of KFA Switzerland and the Swiss Korea Committee said the President KIM IL SUNG was an ever-victorious iron-willed brilliant commander .He reconstructed the DPRK at Chollima speed . Socialist Korea is a people’ fairyland . Dr Dermot Hudson KFA OD for the UK and chairman of UK KFA said in his speech “President KIM IL SUNG had abolished the taxation system in March 1974 making the DPRK the first tax free socialist country and at the same time reduced prices of basic commodities by up to 50 per cent . These measures combined gave Korean working people a huge boost to their income. In the difficult period after the Fatherland Liberation War President KIM IL SUNG had prices reduced on 16 occasions. Thus President KIM IL SUNG was sa great leader who took care ofpeople’s lives and devoted his entire energy to improving living standards. Today the work of President KIM IL SUNG is continued by the honourable successor to the Juche revolutionary cause dear respected Marshal KIM JONG UN who also devotes his energy to improving living standards of the people. The DPRK is the only state in the world with virtually free housing , free education , free health care and no personal taxation .Our duty in KFA is to defend this and publicize its achievements . Let us unite to defend People’s Korea ! Speeches were also made by KFA Germany and KFA Romania . Dr Dermot Hudson read out a message of greetings from the DPRK Committee for Cultural Relations with Foreign Countries . A message from KFA Singapore was read it out , Amongst other things it said that the DPRK had successfully resisted pressure from Gorbachov and Deng to reform and open up A resolution calling for the acquittal of comrade Alejandro Cao De Benos of false charges and for the restoration of his right to travel was carried unanimously . A letter to the dear respected Marshal KIM JONG UN was adopted by the meeting also unanimously . The meeting discussed plans tor the next KFA International Meeting and to attend international events in People’s Korea. In the evening delegates went for a dinner and the next day enjoyed sightseeing around Copenhagen city but without the rain !