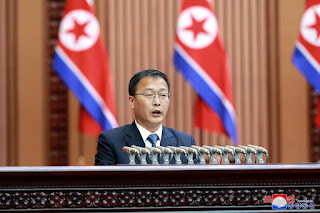 The reporter noted that the state budget for last year was successfully carried out.

Last year a large share of the budget was allotted to strengthening the country’s defence capabilities, implementing the Party and state’s anti-epidemic policy and socialist rural construction policy and stabilizing and improving the people’s life.

The state budgetary revenue for last year was carried out at 100.7 percent, increasing to 101.5 percent as against the previous year.

The state budget expenditure for last year was carried out at 99.9 percent.

A large amount of funds amounting to 101.6 percent as compared with 2021 was allocated to the socialist economic construction to bring a bright prospect for the implementation of the five-year plan and make the overall development of our state and improve the people’s living standard.

15.9 percent of the total expenditure was spent on further bolstering up the war deterrence both in quality and quantity to contribute to defending the dignity and security of the country and the people.

Last year, the state’s capital investment was increased 100.1 percent as compared with the previous year so as to push ahead with the huge construction projects for developing the national economy and providing the people with highly-civilized living conditions.

24.4 percent of the total expenditure was used to make a breakthrough in revitalizing the overall economic front including light industry and fishing industry, while focusing the investment on modernizing the production equipment and expanding production capacity in the key industrial sectors.

The investment in the field of science and technology was increased by 101 percent over 2021.

A large amount of funds equivalent to 1.6 percent of the total state budgetary expenditure was paid to the agricultural sector to accelerate the rural construction and the work for improving the environment of agricultural production on a modern basis.

Last year, the anti-epidemic work expense was set as a major item of the state budget and funds equivalent to 121.3 percent of the plan for the work to build the capability for promptly responding to any health crisis was supplied on a top-priority basis.

100.5 percent of the funds as compared with the previous year was allocated to the socialist cultural construction to contribute to modernizing the educational conditions and environment, strengthening the material and technical foundations of the public health sector and developing the sports, culture and arts.

The reporter stressed the need to financially guarantee the all-people struggle for implementing the decisions of the Sixth Plenary Meeting of the Eighth Central Committee of the Workers’ Party of Korea this significant year marking the 70th anniversary of the victory in the Fatherland Liberation War and the 75th birthday of the DPRK.

The state budgetary revenue is expected to grow by 101 percent over last year, with the turnover tax, a major item of the budgetary revenue, increasing by 100.3 percent and the income from state enterprises by 101.2 percent, which will account for 83.7 percent of the total revenue.

The central budget revenue is expected to account for 73.7 percent of the state budgetary revenue, with the revenue from the central economy accounting for a large proportion, and provinces, cities and counties are to largely fund the central budget while ensuring their expenditure with their own income.

The state budgetary expenditure will increase by 101.7 percent over last year.

The investment in socialist economic construction will grow to 101.2 percent than last year, so that 45 percent of the total budgetary expenditure for this year is to be spent on developing the country’s economy and improving the people’s standard of living.

The defence expenditure is estimated at 15.9 percent of the total budgetary expenditure.

Funds equivalent to 101 percent of last year’s are allocated to the work of the national economy so that the key industrial sectors can work out correct plans for readjustment and reinforcement and stubbornly carry them out and such sectors conducive to the improvement of people’s livelihood as light industry and fisheries can carry out their production plans without fail.

The cost for developing science and technology is to increase 100.7 percent over last year.

This year, funds equivalent to 114.7 percent of last year’s will be spent on the rural construction and the modernization of agricultural production environment.

This year, too, we will invariably send many educational aid funds and stipends to the children of Koreans in Japan so that they can continue to contribute to the development of the democratic national education of the General Association of Korean Residents in Japan.

The reporter stressed that the state budget for this year should be implemented without fail to financially support the work for bolstering up the country’s defence capability, developing the economy and improving the people’s standard of living. -0-