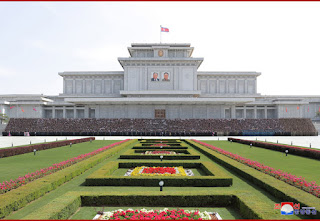 Pyongyang, April 30 (KCNA) — Kim Jong Un, general secretary of the Workers’ Party of Korea (WPK) and president of the State Affairs of the Democratic People’s Republic of Korea (DPRK), had a photo session with the participants in the 10th congress of the youth league on April 29.

The participants in the congress were greatly excited and delighted as they were honored to have a photo taken at the plaza of the Kumsusan Palace of the Sun, the supreme temple of Juche, with the respected General Secretary who made sure that the 10th Congress of the youth league was glorified as the occasion of the epochal turn which marked a milestone of fresh development in the history of the Juche-oriented youth movement, and gave fighting programme for strengthening the youth league.

When the respected Comrade Kim Jong Un arrived at the venue of the photo session, all the participants raised stormy cheers of “Hurrah!” as a token of their deep reverence for the General Secretary who treasures and loves the youth most and brings them up to be reliable successors of the dignified WPK and pillars of our socialist state.

He warmly waved back to the enthusiastically cheering participants as a token of his encouragement to them.

He said that with the congress that was held amid special interest of our Party as an occasion, the youth movement should definitely turn into the great driving force of socialist construction and all the young people should be prepared to be patriotic youth devotedly safeguarding socialism and dedicating themselves to the socialist construction so as to make the whole country be enlivened by young people and steadily increase the ranks of pioneers displaying beautiful traits.

He posed for a picture with the participants, expressing belief that they would make tangible contributions to hastening the bright future of our-style socialism by becoming the first standard-bearers in developing the youth league into the red vanguard ranks and the steel-strong youth organization modeled on the revolutionary idea of our Party and by becoming shock troopers who take the lead in opening the road of advance for carrying out the five-year plan set forth at the 8th Congress of the Party.

All the participants firmly vowed to powerfully demonstrate the stamina and indomitable might of the young vanguard and patriotic youth intensely loyal to the ideology and leadership of the Party in the gigantic advance toward the fresh victory of the revolution, upholding the flag of the Socialist Patriotic Youth League carrying the great trust and expectations of the respected General Secretary as the banner of struggle. -0-