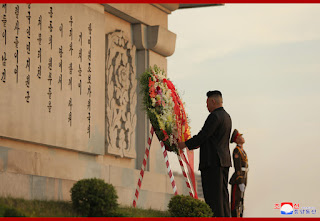 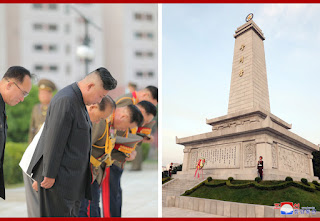 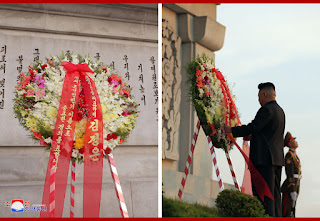 Pyongyang, July 29 (KCNA) — Kim Jong Un, general secretary of the Workers’ Party of Korea (WPK) and president of the State Affairs of the Democratic People’s Republic of Korea (DPRK), Wednesday visited the Friendship Tower on the occasion of the 68th anniversary of the great victory in the Fatherland Liberation War.

Amid the playing of the wreath-laying music, a wreath in the name of the respected General Secretary Kim Jong Un was laid before the tower.

The respected General Secretary paid tributes to the martyrs of the Chinese People’s Volunteers (CPV) who joined the Korean people in the Fatherland Liberation War for repelling the imperialists’ invasion and dedicated their valuable lives.

There was a march-past of the guard of honor of the Korean People’s Army (KPA).

The General Secretary looked round the tower together with the officials who accompanied him.

He said that remaining fresh in the history of the great victory in the war and in the memory of our people are the true militant friendship and matchless sacrificing spirit displayed by officers and men of the CPV who fought shoulder to shoulder with the KPA during the harsh days of the war under the uplifted banner of resisting America and aiding Korea, safeguarding the home and defending the motherland.

The noble soul and exploits of the Chinese people who aided the sacred historic struggle of the Korean people at the cost of their blood when the DPRK was undergoing the harshest and most difficult trials will remain immortal along with prospering socialist Korea, he said, stressing that the DPRK-China friendship forged as kindred ties will be firmly carried forward generation after generation on the road for the common cause. -0-