Skip to content
It’s been 70 years since comrade Kim Jong Suk, anti-Japanese heroine, who devoted herself to accomplish Juche revolutionary cause in her early years until her last breath.Her revolutionary life was the most brilliant one of woman revolutionary true to the cause of President Kim Il Sung.

From the arduous anti-Japanese struggle to the days of new national construction after the liberation, Kim Jong Suk, made immortal contribution to the cause of Juche revolutionary true to President Kim Il Sung, the sun of the nation. 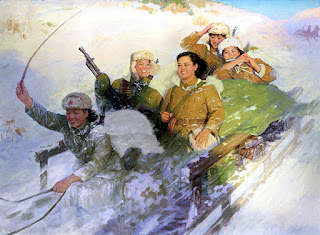 Comrade Kim Jong Suk, who was the model in defending the headquarters of the Korean revolution with her life in the period of anti-Japanese armed struggle, also encouraged the Korean women and people to the campaign for building the country advanced by the President after the liberation.

Grieving over the national division caused by the outside forces, she devoted herself to achieve the unity and reunification of the country day and night, upholding the idea of independent national reunification of President Kim Il Sung.

In those days, broad segments of south Koreans praised great personality of Kim Jong Suk who dedicated herself to the country, upholding the high intention of the President.

There was Ryo Un Hyeong, chairman of the People’s Party, who was popular in south Korea after the liberation.

I’ve met many so many heroines not only in Korea but also in other countries in my lifetime but I’ve never met woman like Kim Jong Suk who was crack shot, had political insight and tender-hearted woman, he said.

She made titanic contributions to bring up Leader Kim Jong Il, the son of Mt. Paektu.