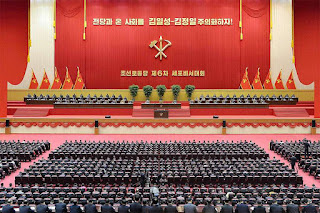 Pyongyang, April 8 (KCNA) — The Sixth Conference of Cell Secretaries of the Workers’ Party of Korea (WPK) continued on April 7 amid the ever-growing revolutionary enthusiasm of its participants to bring about an epochal advance in implementing the decisions of the 8th Congress of the WPK and the 2nd Plenary Meeting of the 8th WPK Central Committee by further strengthening the Party cells that serve as the direct fighting units for implementing the line and policies of the Party.

Jo Yong Won, member of the Presidium of the Political Bureau of the Central Committee of the WPK and secretary for organizational affairs of the Party Central Committee, and other secretaries of the C.C., WPK guided the meeting.

Speeches were made at the second-day sitting.

The cell secretaries, being deeply aware of the importance of the conference in the course of the struggle for strengthening our Party and achieving a fresh victory in socialist construction, carefully listened to the speeches, analyzing and reviewing the successes and experience gained in the work for implementing the policy of strengthening Party cells set forth at the 5th Conference of Cell Chairpersons of the WPK.

Introduced in the speeches were the dedicating and enterprising work experience gained by the cell secretaries who have distinguished themselves in fulfilling their revolutionary tasks by developing the Party cells into the groups of ardent loyalists deeply trusting and following the respected General Secretary Kim Jong Un only and vanguard ranks that carry out the Party policies.

Kim Un Gyong, first Party cell secretary of silk-reeling workers of Workshop No. 3 of the Pyongyang Kim Jong Suk Silk Mill, referred to the successes made in giving full play to the mental power of the producers by conducting, in conformity with the specific conditions of her unit, the ideological education for adding glory to the leadership exploits of the Party in combination with the work for learning from the fighting spirit of the former generations.

She proudly said for the past five years her Party cell has produced many members who have fulfilled their national economic plans of several years and over-fulfilled national economic plan every year by further raising the flames of collective innovation, in which one helps and leads another under the uplifted communist slogan “One for all, all for one!”

Jo Yong Gil, Party cell secretary of the flatcar-making work-team at the locomotive assembly shop of the Kim Jong Thae Electric Locomotive Complex, and Kim Hong Il, Party cell secretary of the conservation and management section of the Ryanggang Provincial Management Bureau for Revolutionary Battle Sites, recalled that they have focused on improving the work of organizing and guiding the Party life of their cell members under detailed plans.

The speakers also told about how they wonderfully carried out the Party policies and main revolutionary tasks before their units by concentrating on carrying out the Party decisions in the work of their Party cells and arousing creative enthusiasm of the masses.

Jo Yong Gil said he oriented the guidance on the Party life into carrying out the revolutionary tasks and aroused the members in his Party cell into displaying loyalty and performing exploits, thus making active contribution to successfully producing subway trains, developing and producing a six-axle alternating-current electric locomotive and repairing electric locomotives.

Kim Hong Il said he meticulously conducted ideological education with main emphasis put on making sure that the Party cell members fully discharge their responsibility and duty in the work for permanently preserving the eternal treasure of the revolution, always cherishing the pride and honor of being the revolutionaries safeguarding the undying revolutionary history and exploits of the peerlessly great men and the relics and sites related to their revolutionary history. These speeches, too, left deep impression on the participants.

Ri Kang Chol, Party cell secretary of Mining Company No. 2 of Pit No. 2 of the Ryongmun Coal Mine, and Kim Yong Il, Party cell secretary of the Bioengineering Research Room of the Rice Institute of the Academy of Agricultural Science, in their speeches referred to how they strengthened the fighting efficiency of the Party cells by furthering the vanguard role of their Party members with the help of concrete methodology.

Introduced in speeches were experience of how they channeled efforts into making the members of the Party cells play the role of educators in the work with the masses with loyalty for the Party, the country and the people and in spirit of dedicated service and turned their units into groups of model innovators in implementing the national economic plans and in conducting scientific researches.

Vividly recalling past deviations by which they failed to see through the real intention of people but took issue with only the existing conditions, and their endeavors to overcome those deviations and to open a door to the people’s minds, they said they gained a valuable experience that the unity and fighting efficiency of the group will be boosted and much bigger achievements can be made in carrying out the Party’s decisions when they go deep among the people despite hardships and devote their sincerity to rid them of mental troubles and difficulties, especially when they educate them to preserve the conscience of the working class.

Ju Pyong Su, Party cell secretary of the ferrous metallurgical chair of the Department of Metal Engineering of Kim Chaek University of Technology, deeply impressed the participants when he said that he successfully conducted the work with teachers and researchers by using the methods suited to their different characters and readiness, thus leading his cell members to contribute to helping the university fully discharge its role as an engine for accelerating the development of science, education and economic construction of the country and as the one of leading universities of the country.

Kim Myong Son, Party cell secretary of the stockbreeding work-team of the Yongjin Co-op Farm in Kangnam County, and Choe Myong Song, secretary of the branch Party committee and concurrently first Party cell secretary of work-team No. 2 of the Paeksok Co-op Farm in Sinchon County, referred to the successes they made in implementing the Party’s agricultural policies and contributing to solidifying the foundations of the rural communities by arousing enthusiasm of the masses with their personal examples and strengthening the ranks of primary officials.

Noting they deeply realized once again how important the cell secretaries’ good examples and the role of primary officials are in arousing mental power of the masses in the struggle for implementing the tasks set forth at the 5th Conference of Cell Chairpersons of the WPK, they told about their good experience in their work.

The speakers said that it is clearly proven that only when the Party cells are made group of genuine loyalists and ideologically pure entity sharing the intention and breath and keeping pace with the Party Central Committee, would it be possible to overcome whatever hardships and difficulties and bring about wonderful fruition in implementing the Party policies.

They stressed that all the achievements made in the Party cell work in the past are the shining fruition of the outstanding leadership of the General Secretary who put the greatest trust in the Party cell secretaries and led them step by step to significantly raise the militant function and role of the Party cells.

They expressed their firm will to strengthen Party cells, the lowest-echelon organizations of our Party, into vanguard ranks of loyalty upholding the revolutionary idea and leadership of the General Secretary in single mind and to make landmark progress in the struggle for implementing the decisions made at the Party congress.

Carefully listening to the speeches, the participants came to deeply understand how heavy their mission is, realizing that to arouse the Party members to implement the decisions of the Party congress by turning Party cells into the iron-willed groups strong in their sense of organization and discipline and fighting efficiency totally hinges on the role of the primary political officials of the Party, and that the successful implementation of the new five-year plan entirely depends on the strengthening of the Party cells.

They were also clearly reminded once again that they can bring about new innovations and perform exploits in fulfilling the revolutionary tasks when they give priority to their political work of arousing the mental power of the masses, always doing twice and thrice as much work as others and making a breakthrough by buckling down to doing toilsome jobs before anyone else.

They said they keenly realized, while reviewing their past work, that if a Party cell secretary fails to dedicate himself to organizing and guiding the Party life of his cell members and drop his stereotyped and chronic working manner, the Party cell will become a spiritless one, bereft of executive and fighting ability, and the Party decision be reduced to an empty talk.

They stressed they learned the lessons that their failure in intensifying the struggle against wrong deeds and in observing the Party principle will entail such a serious consequence as disrupting the unity of the collective and furthermore, divorcing the Party from the masses.

Seriously analyzed in the speeches were also the reasons of the mistakes they made by failing to regularly acquaint themselves with the work of cell secretaries and meticulously organize the work for promoting the militant function and role of Party cells.

They pledged to fully discharge their responsibilities and duties in preparing cell secretaries of their units to be competent political officials of primary organizations with high ideological and mental traits and qualifications and turning their Party cells into the ones strong in their unity and fighting efficiency, by concentrating the Party work into strengthening cells, true to the idea of our Party on prioritizing the Party cells.

The conference also emphasized ways for all cell secretaries to bring about a new turn in the traits of Party work and working manner, well aware of their duty in implementation of the decisions made at the 8th Congress of the Party and the 2nd Plenary Meeting of the 8th Central Committee of the Party.

The participants renewed their will to thoroughly apply the good experience cited by the speakers to their work with the heavy mission that they are responsible for the basic organizations of the dignified WPK.