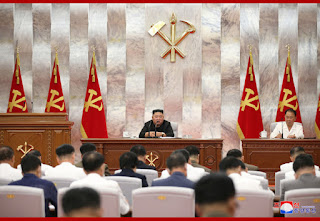 Pyongyang, September 9 (KCNA) — The Central Military Commission of the Workers’ Party of Korea (WPK) held an enlarged meeting at the office building of the Central Committee of the WPK on Tuesday morning as regards the severe damage done to the Komdok area of South Hamgyong Province by Typhoon No. 9, a disaster that seriously affected several areas on the eastern coast and northern inland areas of the country, and discussed state measures for reconstruction.

The meeting was presided over by Kim Jong Un, chairman of the WPK, chairman of the State Affairs Commission of the Democratic People’s Republic of Korea (DPRK) and supreme commander of the armed forces of the DPRK.

The Supreme Leader informed the participants in detail of the situation of the severely damaged Komdok area.

According to the preliminary data, more than 2 000 dwelling houses and tens of public buildings were destroyed or inundated, 60 000 meters of roads in 45 places washed away, 59 bridges collapsed, over 3 500 meters of railway roadbeds in 31 places and more than 1 130 meters of rails in 2 places swept away at the Komdok Mining Complex, the Taehung Youth Hero Mine, the Ryongyang Mine and the Paekbawi Mine, leading to the state of emergency of total paralysis of transport system. And the dam of the sedimentation reservoir of the Komdok Mining Complex was destroyed and lots of equipment were carried away.

The Supreme Leader said that due to the unexpected damage by typhoon we are faced with the situation in which we cannot help but change the direction of our struggle after comprehensively considering the year-end tasks that were under way with the nation-wide efforts.

Noting that the restoration of the Komdok area at the earliest date possible is necessary for protecting the people and state properties there and, at the same time, it is an urgent task that should be given top priority for reviving the important arteries of the national economy, the Supreme Leader stressed the need to take state emergency measures to make sure that new dwelling houses take shape and roads and railways are restored by Oct. 10 and all the damages are undone 100 percent by the year-end.

The Central Military Commission of the WPK set the formation of forces of the People’s Army units to be dispatched to the Komdok area and their mission in the reconstruction campaign and took measures for provision and movement of vehicles and construction equipment and for provision of building materials including cement and fuel and coordinated transport and others, and organized the Komdok area reconstruction commanding group.

Introducing with pride the achievements being made in 24-7 reconstruction campaign by the service personnel and builders dispatched to the fronts for recovery from natural disasters across the country, the Supreme Leader said with confidence that if this spirit goes on, the reconstruction campaign would be successfully carried out by October 10 as decided by the Party and a signal success would also be made in the Komdok area, splendidly adorning this year as the one of victory.

Saying that the ongoing campaign for recovery from typhoon damage is the one for defending the country and people, he ardently appealed to certainly become honorable victors under the banner of great tradition of single-minded unity and army-people unity however wild nature might be and how manifold challenges and trials may hold us back. -0-