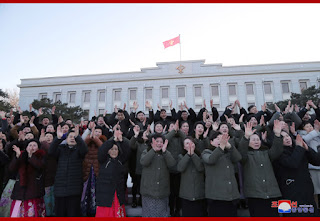 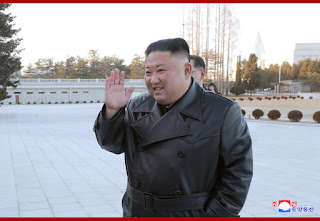 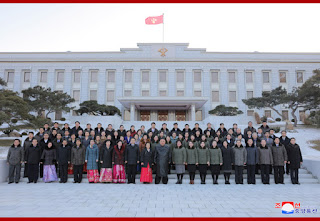 Pyongyang, January 19 (KCNA) — Kim Jong Un, general secretary of the Workers’ Party of Korea (WPK), chairman of the State Affairs Commission of the Democratic People’s Republic of Korea (DPRK) and supreme commander of the armed forces of the DPRK, called the working people of publishing and printing field who contributed to the successful Eighth Congress of the WPK to the yard of the office building of the Party Central Committee and had a significant photo session with them on January 18.

The participants were full of dreamlike happiness and delight of meeting the Marshal whom they have wanted to meet awake and asleep in the yard of the Party Central Committee dear to their hearts and having a souvenir photo of honor taken with him.

Seeing him, all the participants broke into cheers of “hurrah!” in tears for the Supreme Leader who repeatedly thanked them and bestows great solicitude to convey down to the generations while valuing humble efforts made by the ordinary working people for the preparation of the Party Congress.

He spoke highly of them, noting that the congress of our Party could be successful as there were devoted efforts of the working people who showed all the sincerity to carry out the task given to them by the Party at the highest level with pure loyalty.

He had posed for a souvenir photo of loving care, expressing his expectation and conviction that they would make greater successes in their work by displaying boundless devotion and responsibility with their noble mission of taking charge of important post in the Party ideological front in the future, too.

All the participants pledged to bear deep in mind the iron truth that the worthwhile life and happiness lie in the road of following the benevolent father in a single mind with their destiny and future entrusted to him, and to dedicate all patriotic enthusiasm to the sacred struggle for carrying out the decision of the Eighth Party Congress. -0-