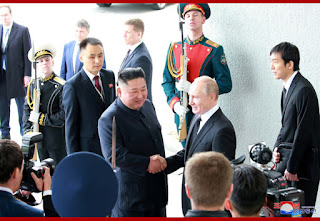 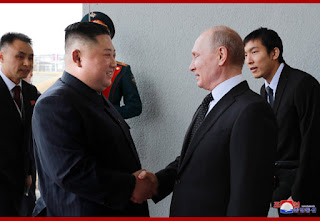 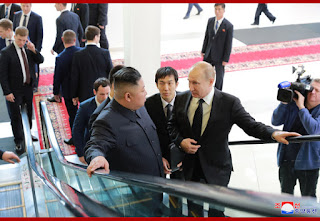 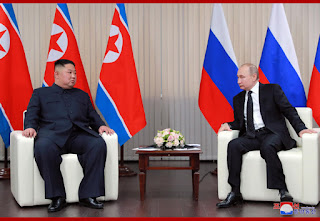 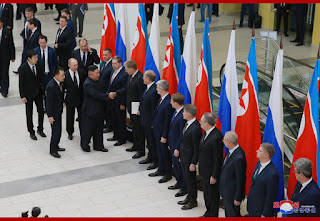 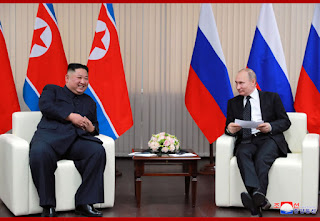 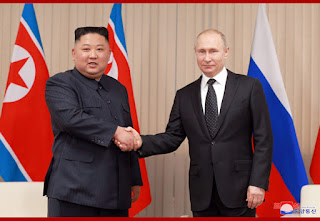 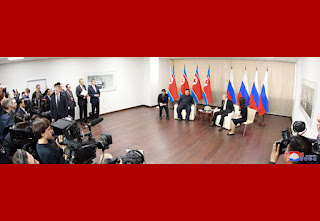 The national flags of the two countries were standing and the guards of honor of the three services of the armed forces of the Russian Federation lined up outside the building of Far Eastern Federal University on Russky Island in the city of Vladivostok, the place for the historic meeting between the two supreme leaders.

The Supreme Leader had the emotion-charged first meeting with the Russian president, exchanging greetings.

They headed towards the venue of talks, having a pleasant chat.

They posed for another meaningful photo against the backdrop of the two national flags standing at the venue of the talks.

There were one-on-one talks between them.

They had a constructive talk in a friendly and candid atmosphere.

After informing each other of the situations in their countries, they agreed on the concrete directions and steps for further promoting mutual understanding, trust, friendship and cooperation and propelling the development of the friendly relations between the two countries oriented toward the new century. They had an exhaustive discussion of immediate issues of cooperation and reached a satisfactory consensus.

They also had an exchange of their successes and experience gained in state building and exchanged honest and candid opinions on sharing each other’s view over some issues with respect to the situation of the Korean peninsula and the field of international relations and on jointly managing the situation.

The two top leaders were unanimous in appreciating that their meeting and talks served as a beneficial occasion of important significance in further consolidating and soundly developing the bilateral friendly relations with long history and tradition of friendship and in strategically controlling the unstable situation of the Korean peninsula in the wake of the second DPRK-U.S. summit talks.

The talks lasted for hours in an unreserved and friendly atmosphere. -0