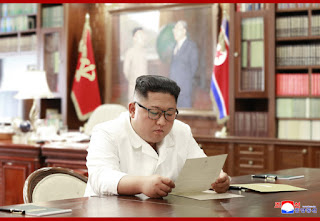 Pyongyang, June 23 (KCNA) — Kim Jong Un, chairman of the Workers’ Party of Korea, chairman of the State Affairs Commission of the Democratic People’s Republic of Korea and supreme commander of the armed forces of the DPRK, received a personal letter from President of the United States of America Donald Trump.

After reading the letter, the Supreme Leader of the Party, the state and the armed forces said with satisfaction that the letter is of excellent content.

Appreciating the political judging faculty and extraordinary courage of President Trump, Kim Jong Un said that he would seriously contemplate the interesting content. -0-