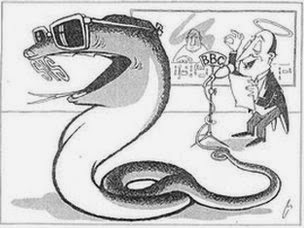 Our KFA UK media monitoring unit drew our attention to an article about the DPRK  on the BBC World News website about the DPRK . The BBC is popularly known as the British Brainwashing Corporation or sometimes as the Biased Broadcasting Company or B…shit Baloney Cabal .

The BBC put  the article first on the website , even though it is not actually a news story but simply the BBC’s opinion about the DPRK , which is not backed by any real facts. Surely only actual news should be on a news website .

The article falsely claimed that people could be executed or punished by law  for watching foreign content or wearing ‘skinny jeans ‘ (no one in the DPRK wears skinny jeans in the first place ) . In fact if you visit the DPRK and go to the top floor of the Grand People’s Study House you will find foreign music there  which can be listened to , including ‘Hey Jude ‘ by the famous 1960s British pop group the Beatles . Some DPRK students told a visiting delegation that as part of their course they watched the film ‘ The Firm ‘.

Needless to say the BBC quotes as one of its sources for the ‘story ‘ , the notorious far right fascist ‘Daily NK’ website which is funded by the US CIA by the National Endowment for Democracy . Many of their stories about the DPRK have been demonstrated to be false . The article also quotes ‘ defectors ‘ from the DPRK . Why do the Western mainstream media constantly quote and publicise these people ? They are totally unrepresentative. In fact the DPRK has fewer defectors than other socialist countries had  in the past . Many so-called ‘defectors’ are actually people who committed crimes in the DPRK . One wonders if the BBC and other Western msm outlets are systematically bribed by south Korea to run stories painting the DPRK in a negative light .

What is true is that the DPRK , and quite rightly so , rejects toxic Western culture such as pornography and drugs and struggles to prevent their infitration into the DPRK .The DPRK is determined to upholds it culture and way of life by rejecting the ideological and cultural invasion of Western imperialism . The DPRK is resolutely smashing coca colonisation . The US and other western countries enslave the whole world by swamping other countries with their culture. In the past the US destroyed socialism in the USSR and Eastern Europe by infiltrating their culture into those countries . The DPRK is not going to fall into the same trap ! . A powerful movement is being waged in the DPRK against the cultural invasion of imperialism . This is not done through executing people or sending people to labour camps but through criticism , self-criticism , education and persuasion . It is something that should be applauded not condemned .

As for the BBC, it isn’t a disgrace that we have to pay for their lies and fund the good life of overpaid BBC journalists  !