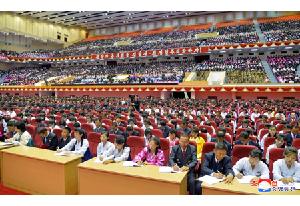 Pyongyang, September 4 (KCNA) — The 14th National Conference of Teachers was held at the Pyongyang Indoor Stadium on Tuesday.

Present at the conference were Kim Jae Ryong, member of the Political Bureau of the Central Committee of the Workers’ Party of Korea, member of the State Affairs Commission of the DPRK and premier of the Cabinet, Pak Thae Song, member of the Political Bureau and vice-chairman of the C.C., WPK, Jon Kwang Ho, vice-premier of the Cabinet, Choe Tong Myong, department director of the C.C., WPK, Kim Sung Du, chairman of the Education Commission, chairpersons of the provincial party committees, exemplary teachers and educational workers, leading officials in the educational field in Pyongyang, provinces, cities and counties, those teachers who volunteered to work at branch schools on islands, in forefront and mountainous area, educator families and couple teachers, officials of related units including organizations that gave an active support to the educational work and Sin Kil Ung, head of the delegation of the education officials of the General Association of Korean Residents in Japan.

The conference analyzed and reviewed the successes and experience as well as faults in the struggle for implementing the Party’s policy on bringing about a radical turn in education in recent years and discussed the practical issues for improving the educational work.

Supreme Leader Kim Jong Un’s work “Teachers Should Fulfill Their Duty as Career Revolutionaries in Implementing the Party’s Policy on Bringing About a Radical Turn in Education” was read out by Pak Thae Song.

Kim Jong Un in the work clarified the Party’s intention and determination to bring about a great turn in education to definitely put the level of education of the country on the most advanced level in a short period in order to cultivate all the students to be revolutionary talents who should shoulder upon the future of the powerful and prosperous country, the mission and duties of teachers as soldiers on an outpost duty in bringing about a turn in education and concrete tasks and practical methods for markedly developing the overall level of education of the country.

Premier Kim Jae Ryong made a report at the conference.

The reporter said that Kim Jong Un attached great importance to the conference and guided the preparations for the conference and published the work “Teachers Should Fulfill Their Duty as Career Revolutionaries in Implementing the Party’s Policy on Bringing About a Radical Turn in Education” to clearly indicate the tasks and ways for accelerating the building of a socialist education power and a talent power.

The last 5 years since the 13th conference were the historical days that witnessed a great progress in the overall education of the country under the leadership of the great Party, he noted.

The educational work of the country has made an advance in the past 5 years under the wise leadership of the Supreme Leader, he said.

The firm guarantee for improving the qualitative level of the secondary general education has been provided in the wake of the successful enforcement of the universal 12-year compulsory education, which is a success to be specially recorded in the history of development of Juche-oriented education, he stressed.

He said that the ongoing grand march of self-reliance which opens a new road of the building of a powerful socialist nation urgently needs a revolutionary turn in education.

He stressed the need for all the teachers and officials in the field of education to fulfill their responsibility and duty as frontline soldiers of the front to train talents and career revolutionaries, single-mindedly holding the idea and guidance of Kim Jong Un.

A congratulatory group of the Korean Children’s Union entered the venue of the conference and recited congratulatory poem “Congratulations to teachers across the country”.

At the conference speakers referred to the experience gained in the course of creating profitable and advantageous teaching methods true to the Party’s policy of bringing about a radical improvement in education, and applying them to teaching.

Speeches analyzed and reviewed such faults as failing to properly organize implementation of the Party’s policy of bringing about a radical improvement in education.

The speakers vowed to make a tangible contribution to developing education by getting rid of the past wrong ideological viewpoint and manner of work with the conference as an occasion and displaying activeness, creativity and stubbornness. -0-