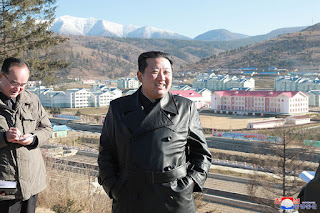 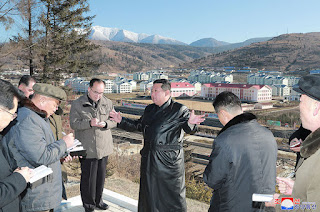 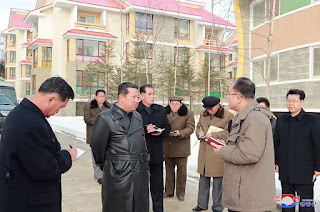 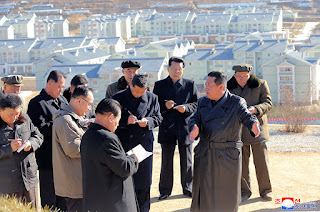 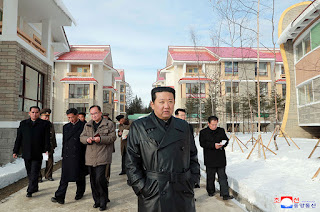 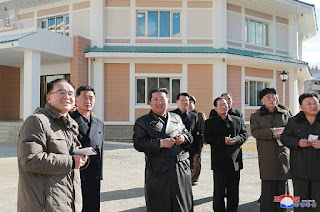 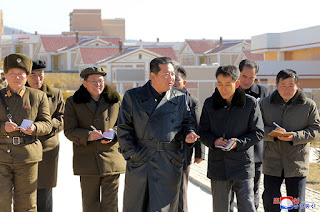 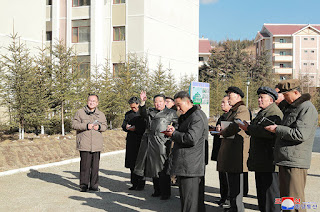 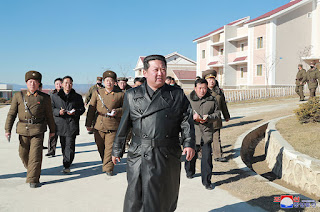 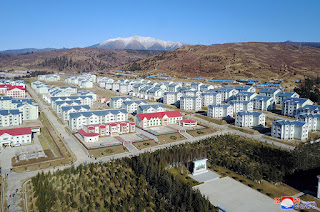 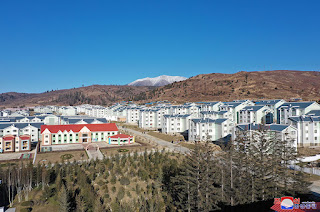 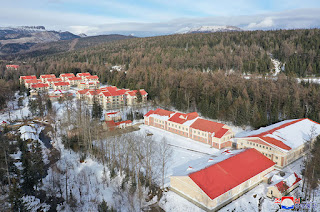 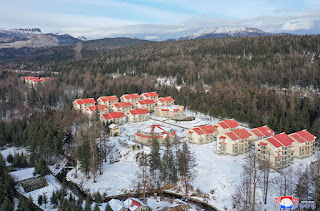 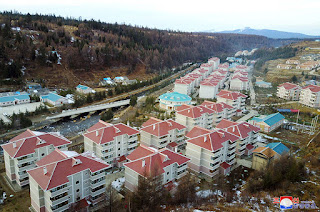 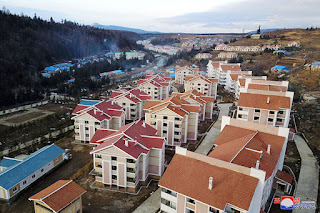 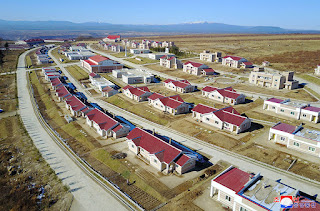 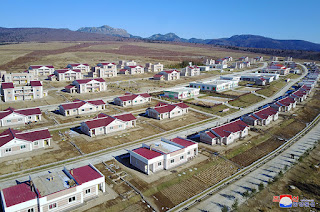 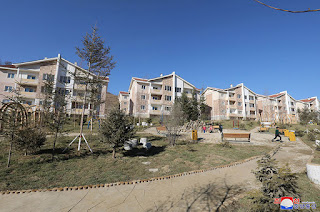 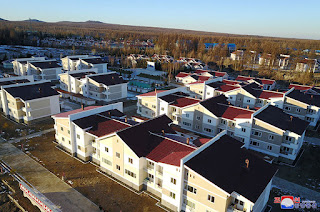 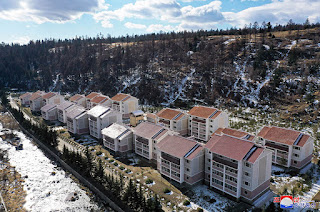 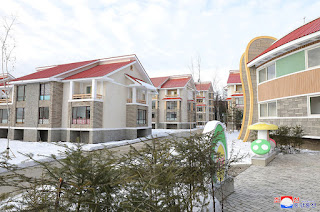 Pyongyang, November 16 (KCNA) — Kim Jong Un, general secretary of the Workers’ Party of Korea (WPK) and president of the State Affairs of the Democratic People’s Republic of Korea, gave on-the-spot guidance to Samjiyon City to learn about the real state of the third-stage project with the conclusion of Samjiyon City construction now in hand.

Thanks to the energetic leadership of Kim Jong Un determined to turn the city into a model of a mountainous cultured city and into an ideal local city as befits the sacred place of the revolution, the construction of the city has been vigorously pushed forward with as the work of the whole Party and state, being divided into three stages. And the construction of the city is due to be concluded this year.

According to the plan and policy of the Party to spruce up the areas and farms adjacent to the township of Samjiyon City in a three-stage project in the wake of the completion of the township, the huge project comprising the construction of dwelling houses for thousands of families, public and production buildings, educational facilities, water supply and drainage system, roads, afforestation and greening and power grid system in the ten-odd dongs and ris including Paektusan Secret Camp-dong, Rimyongsu-dong, Sinmusong-dong, Dam No. 5-dong, Phothae-dong, Junghung-ri, Hunggyesu-ri, Sobaeksan-ri, Paeksam-ri, Poso-ri and Thongsin-ri is due to be finished soon.

The respected General Secretary learned comprehensively about the real state of the construction of Samjiyon City, city management and farming while giving field guidance to dwelling houses, educational facilities, cultural and welfare facilities, camping buildings for study tour teams in Paektusan Secret Camp-dong, Rimyongsu-dong and Phothae-dong and several other units in the city including Junghung Farm which had been built, being divided into three stages.

He said with high appreciation that all the buildings highlight the peculiar local features as well as natural environment and thoroughly embody practicality, diversity and formative art in keeping with our Party’s idea on the Juche-oriented architectural beauty and with the policy requirement for local construction.

Saying that all the buildings of Samjiyon City are associated with the lofty loyalty, strong will and sweat of our people who are determined to absolutely support and uphold the grand plans and resolutions of the Party and implement them, the General Secretary noted that not only the township but also several areas and farms in the city have turned into examples of a mountainous cultured city under socialism and standard units of rural development thanks to the dynamic struggle of the builders who vigorously pushed ahead with the huge project without a stop despite the unfavorable environment in the northern tip of the country.

Saying that, as he continuously stressed, it is the deserved duty and revolutionary obligation of our people and new generations who are the soldiers and disciples of the great leaders to turn Samjiyon City, the sacred place of the sun where the native home of the revolution is located, into a firm base for education in revolutionary traditions and a model of civilized mountainous towns, the General Secretary said that the noble struggle helped fully demonstrate the unyielding faith and will of all the people to remain loyal to the leader to the end and add eternal luster to the revolutionary exploits of the leader, and this has more firmly provided a fundamental guarantee for carrying forward and accomplishing the revolutionary cause of Juche.

Noting that the 4 year-long construction of Samjiyon City proved the irresistible might of the single-minded unity and harmonious whole of the Party and the people and also the iron will of our state to achieve prosperity our own way and with our own efforts, as well as its self-confidence and possibility of independent development, the General Secretary, in the name of the Party Central Committee, sent thanks to the builders, supporters and the people of the whole nation who brilliantly realized the decisions and policies of the Party.

He said that the achievements, experience and standards gained through the construction of Samjiyon City serve as correct guidelines for pushing forward our Party’s policy of local construction in the right direction. He added that this has great significance in the on-going struggle for making a new start for the change of local areas.

Calling for bringing about a radical turn in development of local construction and the building of civilized society by actively encouraging and expanding excellent experience gained in the construction of Samjiyon City, the General Secretary said that in order to correctly propel the grandiose construction policy of our Party without deviation, it becomes priority issues and strategic task to promptly strengthen the construction and designing forces in the local areas and firmly lay their material and technical foundations.

The General Secretary emphasized that the provinces, cities and counties should take organizational and institutional steps and press for prompt state measures to strengthen construction and designing forces. He also underlined the need to raise the specialization level of construction units and to enhance the role and function of institutions supervising construction and thus ensure the maximum quality in construction.

Looking round modern houses of peculiar styles and ri cultural hall built in the Junghung farming area, the General Secretary said that the area can be called a picturesque model unit in rural buildup.

Calling for making substantial farming preparations for next year by learning from experience of potato farming for this year, he underscored the need to make scientific and technological study and taking measures to ensure stable increase in potato production without fluctuation despite the unfavorable conditions in the northern alpine areas. He encouraged the agricultural field to raise once again the hot wind of potato farming. He learned about issues arising in the farm one by one, and said that the Party will render active support to make the farm a model unit in the introduction of farm machines, now that it has been spruced up as a standard unit in farm buildup.

Calling for flawlessly paving roads in the city to correspond with the living environment in Samjiyon City that has undergone a great change, the General Secretary held consultation over the yearly road pavement section plan for the future and set forth concrete direction.

Referring to the ecological environment and afforestation of Samjiyon City, the General Secretary stressed the need to make deep study of relevant field so that thorough-going measures can be taken to protect forests, and scientific and technological management is realized to cope with all sorts of factors like damage by harmful insects and climate change.

He said that the construction of Samjiyon City becomes a starting point of a new revolution in making the people in local areas witness a leaping progress to a highly civilized material and cultural life.

The General Secretary said that he felt pride in having done worthwhile work welcomed by the people, upon hearing a report that the people in the land of Samjiyon were very happy over the change in Samjiyon and they were singing highly of the benevolence of our Party. He added that people’s opinion is precisely the general evaluation of the construction of Samjiyon City, repeatedly expressing great satisfaction.

Noting that the construction of Samjiyon City has been wonderfully done as planned and intended by the Party, the General Secretary warmly wished for the happiness and well-being of all the people of Samjiyon City who would lead a highly civilized and wonderful cultured life in the place dear to heart, the place housing the native home of Chairman

Kim Jong Il and in which Mt Paektu stands. -0-