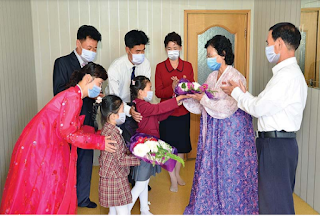 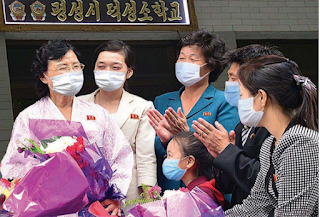 November 16 is Mother’s Day in the Democratic People’s Republic of Korea.

Choe Yong Ae is the headmistress of Toksong Primary School in the city of Phyongsong, South Phyongan Province, in a western region of the Democratic People’s Republic of Korea.

Even though she has a lot of things to do in her family, she has devoted herself to training not only her children but also the students of her school as pillars of the country.

The history of her school tells her exploits–first place in a national quiz contest for primary school students and a city computer competition, hundreds of students enrolled at schools of higher education of the national and provincial level including Pyongyang

Middle School No 1, gold medals in the events of rhythmic gymnastics and swimming at

In high appreciation of her exploits, the Party and the government invited her to

national conferences including the Seventh Congress of the Workers’ Party of Korea and National Conference of Educational Workers and conferred on her the title of People’s Teacher.

She also brought up her daughters so that they would repay the warm care shown by the socialist system, which taught them to respect their seniors and love their comrades and brought their hopes into bloom. The two daughters, after graduating from university, are working in a power organ and the educational sector, respectively.

In celebration of Mother’s Day, her daughters and students extended warm congratulations to her.