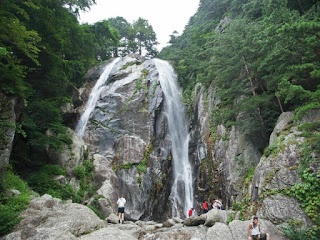 The Democratic People’s Republic of Korea is drawing the attention of the international society as a country free from pollution.
This country is free from mental pollution. Such an act as sacrificing others can never be witnessed in the country; on the contrary, people devote themselves for the sake of others, like a girl known across the country as girl mother for bring up orphans, young people taking care of the elderly with no one to support, and a woman teacher who piggybacked a crippled student to school for over ten years. Numerous stories of good deeds are told in the country; an official saved another’s child first rather than his child when they were drowned in a river, young people married discharged wounded soldiers and people donated their blood and skin for a patient. What is surprising is that such laudable deeds are regarded as commonplace in the country.
The CEO of the Johnson Nicolson Company of Malaysia said: In the DPRK man is regarded as the most precious being and people possessed of ennobling moral and mental traits live harmoniously, helping and leading one another forward. As a Christian, I advise the people the world over to visit this heavenly land.
It is quite natural that such mental pollution as social evils and crimes that torment people cannot be found in this heavenly land.
The DPRK is free from natural pollution as well.
Many visitors to the country say that the environment of Pyongyang, the capital of the country, is very clean and beautiful. When spring comes, the scenery is unfolded; the trees and shrubs on the roadsides are in full bloom and honey bees fly there.
The air of the banks of the Taedong River is very clear; at dawn and in the evening people can be seen doing exercise or jogging by individuals, families or teams.
Everything in the country, including air, mountain, river, lake, spring and sea, is free from pollution by waste materials. The fresh air and clear sky give a deep impression to the foreign visitors. The Kumgangsan Spring Water and Kangso Mineral Water won international certification as world-class natural drinks. Tourist attractions which make an effective use of natural resources, like the Yangdok Hot Spring Resort, are drawing an international attention as pollution-free areas.
Natural reserves including Mt Paektu, which is registered as an international bio-sphere reserve, and other mountains like Kumgang, Myohyang and Chilbo and such famous places and spots as the Songdowon bathing beach, Myongsasimni and Lake Sijung are noted as pollution-free areas with protected natural ecological environment.
The DPRK protects the natural living monuments and the natural ecological environment of natural reserves through state measures. Every year the work of protecting land and environment including tree planting in spring and autumn, pest control in forests, river improvement and forest restoration is conducted as a campaign involving the whole country and all the people. The environment-friendly technologies that utilize solar energy, terrestrial heat and wind are actively being developed and introduced into economic development. The industrial enterprises and other production units are putting their production lines on a germ- and dust-free footing. Thanks to such measures aimed at protecting the environment the DPRK has turned into a land which any world-wide epidemic cannot attack.
The international community are learning this from the fact that the country has so far been unaffected by Covid-19 as it was by SARS and MERS.