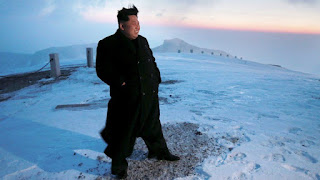 There are many nations in the world, and each nation has its own spiritual support. The spiritual support of the Korean people is the spirit of Mt Paektu.
The spirit of Mt Paektu is an unyielding offensive spirit of braving obstacles and difficulties and a staunch fighting spirit of rising up no matter how often one may fall and fighting it out.
From olden times the Korean people have worshiped Mt Paektu and regarded it as their ancestral mountain.
In the past a foreigner, who climbed Mt Paektu, wrote in his article: Mt Paektu is α and Ω of Korea.
He had in mind that Mt Paektu is both the starting and ending points of Korea.
The spirit of Mt Paektu was created at the time when Kim Il Sung (1912-1994) was waging the anti-Japanese war around the mountain, leading the guerillas; the first generation of the Korean revolution cherished this spirit as the core of their ennobling spirits.
In March 2000, looking around the revolutionary battle sites in the Mt Paektu region, Kim Jong Il (1942-2011), chairman of the National Defense Commission of the DPRK, said that the Korean revolution was rooted in Mt Paektu and the spirit of Korea was the spirit of Mt Paektu.
The spirit of Mt Paektu reflects the soul and mettle of thoroughgoing independence and the ennobling ideological spirit that runs through the history of the Korean revolution.
In the period between the late 19th century and the early 20th century, the national strength of Korea got deteriorated day by day as the ruling circles of feudal Joson dynasty were steeped in the worship of big countries, and in the end Korea had to ask this or that country to guard its royal palace because it had no proper army. Finally, it had to face the tragedy of national ruin by the Japanese imperialists.
At that time the weak Koreans could not resist to the foreign forces even though they were bereft of their country, but only deplored their fate with tears and wails.
These Koreans became conscious of the spirit of independence as they heard the gun shots raised by the anti-Japanese guerillas fighting in Mt Paektu, and greeted the liberation of their country by defeating the Japanese imperialists who were boasting of being the “leader” of Asia.
It was because they cherished the spirit of Mt Paektu that the patriots of Korea could achieve the liberation of their country through the armed resistance against the one-million-strong Japanese troops for more than a decade without any backing of a state nor support by a regular army.
With this very spirit, Korea built the first-ever democratic and independent sovereign state in the East and created by dint of the Korean-style art of war the myth of defeating the imperialists boasting the “strongest” in the world. After that Korea carried the postwar rehabilitation and socialist construction by the efforts of its own people and established independent, self-supporting and self-defensive socialism in conformity with its reality.
Kim Jong Un, chairman of the State Affairs Commission of the DPRK, said: The blizzards of Mt Paektu are the real taste of the mountain; the revolutionary spirit of Paektu, the spirit of the blizzards of Paektu, reflects the noble spirit our army and people should always cherish in their hearts; if we cherish this spirit, we have nothing to be afraid of in the world and we have nothing we cannot do.
The spirit of Mt Paektu regards national independence and national self-respect as the lifeblood, and shows no mercy or forgiveness for the aggressive forces. 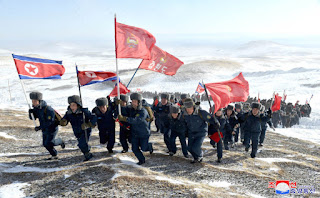 With this very spirit, the Korean people are waging an offensive for a frontal attack to achieve a breakthrough in confrontation with the hostile forces that are trying to stamp out their country’s rights to independence, existence and development politically, militarily and economically.