Now south Korean people’s struggle against the increase of upkeep expenses for the US army is developing in south Korea.

On Oct. 22, the People’s Party had a press conference in Seoul at which it declared that would launch struggle against the increase of upkeep expenses for the US army.

In particular, simultaneous action would be held at over 600 places and all members of the party will immediately go into emergency action in November, it noted.

On Oct. 23, two civic organizations called a press conference near Chengwadae to denounce gangster-like demand of the US. 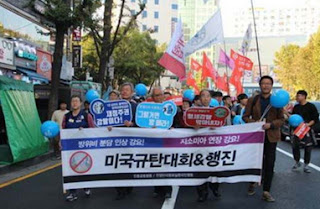 The organizations stated that they have no money for the US that is going to wrest exorbitant amount of money from the people and they would continue protest against it.

They also said that the unequal special agreement of sharing expense for upkeep for the US army must be abolished and the and south Korean government should get rent, taxes and trillions of won for purification of environment of the military bases from the US.

They stressed that it would launch demonstration against the increase of upkeep for the US troops and a nationwide signature campaign across south Korea.