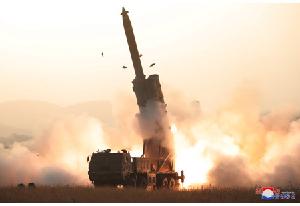 Pyongyang, November 1 (KCNA) — The Academy of Defence Science of the Democratic People’s Republic of Korea succeeded in another test-fire of super-large multiple rocket launchers on Thursday afternoon.
The Academy of Defence Science organized the test-fire to verify the security of launchers’ continuous fire system.
The successful test-fire result was directly reported to the Central Committee of the Workers’ Party of Korea on the spot.
After receiving a report of the Academy of Defence Science on the military and technical appreciation of the test-fire, Supreme Leader Kim Jong Un expressed satisfaction over it and sent congratulations to the national defence scientists who are devotedly struggling for developing the self-defensive military muscle of the country and bolstering up its armed forces.
The perfection of the continuous fire system was verified through the test-fire to totally destroy with super-power the group target of the enemy and designated target area by surprise strike of the weapon system of super-large multiple rocket launchers. -0-