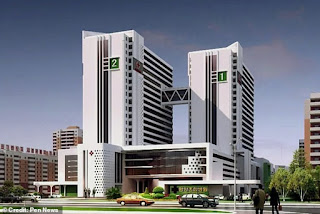 In the Democratic People’s Republic of Korea now, a modern general hospital is under construction.
This general hospital, situated in Pyongyang, the capital of the country, is planned to be completed greeting October 10, 2020, the 75th anniversary of the Workers’ Party of Korea.
For the country, this project is not merely aimed at building another hospital.
The country intends to turn this project into a springboard for making a great leap in the public health service of the country. In recent years, modern ophthalmic, dental and other specialist hospitals, as well as a children’s hospital, have been built in Pyongyang.
However, Chairman Kim Jong Un of the State Affairs Commission said that these successes were merely like grains of sand on a mountain when compared to the lofty ideals and ambitions of the Workers’ Party of Korea. He stressed: With the mindset that we are starting everything from scratch, we should take the first step in building our public health service into one that is people-oriented and advanced.
The WPK and the government of the country had officials from various sectors visit some of the most advanced hospitals in the world before starting the project. On the basis of it, the WPK is going to build the hospital as a central base for making a leap in the health service sector of the country.
Its site is symbolic. It is being built on the bank of the Taedong. On the other side of the river is Mansu Hill on which the statues of President Kim Il Sung (1912-1994) and Chairman Kim Jong Il (1942-2011), the eternal leaders of the Korean people, stand. Symmetrically across the river stands the Monument to Party Founding, symbolizing the founding and development of the WPK that has defended and ensured the dignity and happiness of the Korean people. As a result, the hospital lies on the straight line between Mansu Hill and the Monument to Party Founding. This denotes that to build a world-class general hospital for the people is the ideal of the preceding leaders of the DPRK, as well as the will of the WPK.
The WPK and the government intend to ensure that, in building the general hospital, the spirit of making selfless, devoted efforts for the people permeates the ongoing frontal offensive to achieve a breakthrough and also expect the successes achieved in the course of building the hospital to be rapidly propagated to all sectors of socialist construction.
The Fifth Session of the Seventh Central Committee of the WPK held in December last year set forth the line of overcoming all the difficulties lying on the road of advance by the frontal offensive. Now the DPRK is faced with the harshest-ever challenges by the hostile forces, who have blocked foreign trade by the DPRK, and are forcing other countries not to conduct trade with the DPRK. Their aim is to destroy the economy of the DPRK, deteriorate its people’s living and, finally, to pull down its socialism.
The DPRK is giving priority to building the general hospital while putting off the construction projects planned this year, so as to make the principle of serving the people permeate economic and cultural construction.
The intention of the WPK to complete the project by its 75th founding anniversary can also be viewed from a similar point of view. The construction period is less than 200 days (ground-breaking ceremony was held on March 17), and the conditions are not so favourable. However, it is the WPK’s will to complete the project without fail by launching an offensive, 24-7 struggle and lightning campaign.
The WPK and government expect that, when an unprecedented miracle is created in the construction of the general hospital, the successes will inspire all the people, bringing about innovations in other sectors.