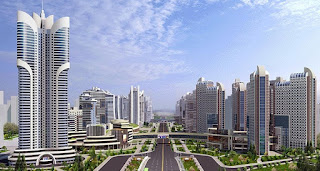 A declaration rang out in the Democratic People’s Republic of Korea that it will build itself into a powerful and prosperous socialist country in which all the people are living happily, drawing the attention of the international community.

Many people of the world doubt if the country’s dream can come true when it is experiencing unprecedented trials and hardships amid the harsh sanctions by the hostile forces and world health crisis.

The construction of such a country must be supported first by funds.

This shows that the DPRK has a strong financial capacity. In other words, it can make investments in the economy while building such a large number of houses and giving them to the people free of charge.

Building a powerful country is inconceivable separated from a high level of science and technology and rich resources.

The DPRK is on a high level in basic sciences like mathematics and physics, and laser, space, CNC machine tool and software technologies are recognized by the world. A few years ago VOA commented that in view of the performance tables and operation of the CNC machine tools made public, it can be said that the country possesses the technology that can be ranked in the top ten in the world. In the aspect of resources, the country has large deposits of magnesite, zinc, lead,graphite, tungsten, anthracite coal and iron. According to a report, the major underground resources, excluding the rich deposits of brown coal and limestone, when calculated in the international market price, amount to USD 3-4 trillion.

At its Eighth Congress held early this year, the ruling Workers’ Party of Korea indicated a clear-cut orientation of the country’s development, and all the people have turned out with confidence for the building of a powerful socialist country.

What the world must not neglect is the fact that the DPRK carried out the historic task of socialist industrialization within 14 years in the middle of the last century. As it did at that time, the world will see the country turning its dream into reality for a powerful socialist country within 15 years or so.