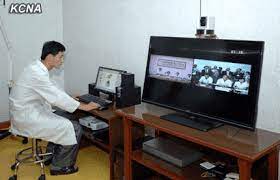 Telemedicine system is now in operation across the Democratic People’s Republic of Korea.

When seen from its not so large territory and population, the figures and facts are never insignificant.

With the proactive operation of this system, accurate diagnosis methods are made promptly and relevant measures taken. The result is that the number of patients being dispatched to higher-level hospitals is decreased considerably, and the severest cases like acute arterial block and cerebral cardiac disorders that require immediate surgical operation are treated through this system on the spot. The patients, whose diagnoses are not clear and those for whom pharmacotherapy is not efficacious, also enjoy the benefits of telemedicine.

Through emergency consultation with the Pyongyang Maternity Hospital, a county hospital in northeastern North Hamgyong Province could miraculously bring back to life a worker’s baby whose life could not be guaranteed as it had been in a critical state immediately after birth. A boy in a mountain area in northernmost Ryanggang Province, who was bed-ridden because of sudden illness, could recover his health after receiving treatment at the local hospital through the telemedicine system.

The following is another example. A woman in her forties and hospitalized in a county hospital in eastern South Hamgyong Province asked the head of the internal medicine department of the hospital if he could arrange online consultation with a central hospital in the capital city for her. When the doctor laid out the schedule for the consultation, she asked this time if she could have her disease diagnosed by doctors in other hospitals in the capital city as well for a more accurate diagnosis. The request of the patient living far away from the county town was satisfied.

What is interesting is that these patients do not know that if they were in other countries they would have to pay the doctors according to their professional degrees and for the time spent for such consultation.

Another interesting thing is that the doctors in this country do not feel apprehensive of the fact the specialist knowledge they have accumulated with so much effort and their clinical experience may be revealed to others through online medical service.

When a workshop of WHO was held in Pyongyang for the Southeastern Asian region, the participants pointed out the three characteristics of the telemedicine system in the DPRK: first, it covers the whole country; second, it is provided to all the people free of charge; third, it has attained a high level in a very short time.