and the future of all countries.

Especially, the period of nursery and kindergarten covers the most important

part of human development, and thus it is highly important to pay attention to

nutrition and health management of those in this age group.

On the occasion of the day, childcare in the Democratic People’s Republic of

children, in which all the pre-school children are enrolled and reared in nurseries

and kindergartens at state and social expense.

This system is legally guaranteed by law.

in March 1999. Comprised of sixty articles in six chapters, the law

of nurseries and kindergartens, supply of grains and other foodstuffs, clothes,

footwear and other daily necessities, special protection of mothers with children,

nutritional and medical service for children, treatment of nursery and kindergarten

teachers, organization and operation of nurseries, kindergartens, baby homes and

orphanages, and guidance, management and supply systems for them, etc.

provinces have been renovated, and the orphans across the country are provided

with quality nutritional foods on a special and preferential basis.

and take pride in them in front of others. A Korean saying goes that it takes

fifty thousand man-days to raise a child, implying how demanding and challenging

it is. Worse still, it is by no means easy for the country to adopt such a resolution in

prolonged sanctions by the hostile forces coupled by the global health crisis.

Kim Jong Un of the WPK, who regards it as a source of happiness, not a challenge,

to spare nothing for the children across the country, saying that it is a blessing for

the WPK to be in charge of raising millions of them. Also, it is a moving story

unique to the WPK that cherishes as an ennobling ideal the spirit of making selfless,

devoted efforts for the good of the people.

Thanks to the benevolent care of the head of state and ruling party, the DPRK is

well advanced in its pursuit of good health of the children.

The association trains the professionals in the fields of children’s healthcare,

nourishment, intellectual development and day care, and plays the role of a

communications office and a channel of assistance for children. Outreach programs

are briskly underway and hygienic information work is being energetically

rate of missing in inoculation. Its production bases make a variety of traditional

medicines including anti-virus liquid medicine made from burdock, contributing to

the treatment of pediatric diseases. It is also engaged in the major evaluation of 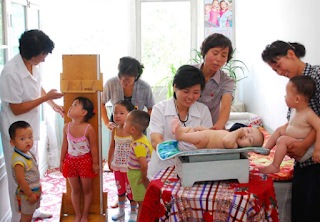 nurseries, kindergartens and pediatric hospitals designated as targets of assistance

and reinforcing the trial production processes of nutritional foods for the children.

fostering the climate of social support for the children.