There is the Ryugyong General Ophthalmic Hospital in Pyongyang, the capital city of the Democratic People’s Republic of Korea.

Kim Man Sok, aged 47, who is recognized as an authority in the hyaloideoretinal operation in the field of ophthalmology, works as the director of the retina department.

When he was a child, he hoped to become a teacher.

However, his parents advised their son to become a doctor as he was careful in everything and quick in the movement of his hands. So, with a determination to become a doctor, he entered Pyongyang University of Medical Sciences after graduating from a middle school.

During his university days he studied hard and finished even the postgraduate course with top honours.

In 2005 he began his career at the Pyongyang Ophthalmic Hospital; one year later he became an operating surgeon. When he saw the patient whom he had personally performed an operation for the first time recovered his eyesight, he was beyond himself.

He made redoubled efforts and challenged the hyaloideoretinal operation that requires comprehensive knowledge in the ophthalmic field.

. In response to the healthcare policy of the Workers’ Party of Korea to enable all the people to enjoy the real benefits of socialist healthcare system, he pioneered the cutting-edge technology in his own way.

Over the last ten-odd years he has recovered the eyesight of more than 1 000 patients suffering from malignant diseases, during which he became a holder of academic degree and authority in this field by writing several valuable medical essays.

His colleagues are wont to say that he became a competent doctor loved by the people not only because he possesses high medical skills but he cherishes true devotion to fellow people and a high sense of responsibility for his work.

A saying goes that medicine is a benevolent art.

Dr. Kim treats every patient kindly and devotes all his sincerity to each of the operations as he does to his family members.

In fact, it is easier said than done to perform an ophthalmic operation, which demands a high level of concentration, for six hours in average every day. Patients call him a  doctor with true devotion.

In the world there are so many physicians, though they chant the Hippocratic oath every day, use their skills as a means for lining their pockets, examining first the patients’ purses. However, medical workers of the DPRK, like Kim Man Sok, take pride in devoting their skills and devotion to serving the patients. 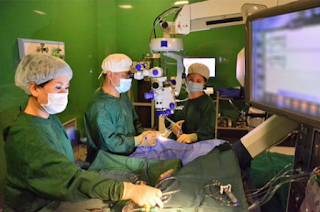 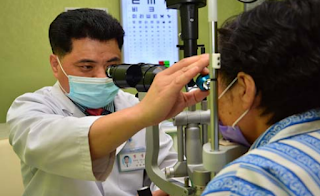