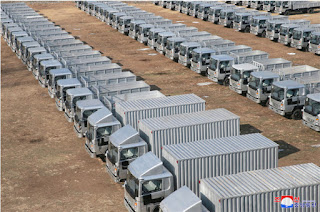 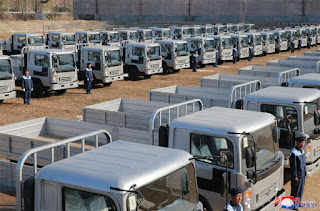 Fruition of Self-Reliance
The Sungni Motor Complex in the Democratic People’s Republic of Korea makes a great contribution to the economic development of the country by producing a lot of lorries of various types.
In May Juche 105(2016), the respected supreme leader Kim Jong Un saw a new-type lorry manufactured by the complex and said that it had been made well and it is a proud fruition of self-reliance.
He visited the Sungni Motor Complex in November Juche 106(2017).

Looking at the new-type lorries standing in rows to fill up the spacious parking lot, he said with great satisfaction that they are the lorries made by Korean workers with their own efforts.
He drove a lorry to learn in detail about its performance and technical specifications. He said: The engine sounds even and the gearbox works well. The workers of the Sungni Motor Complex have successfully produced the new-type lorries in the period set by the Workers’ Party of Korea by fully displaying the spirit and mettle of the workers of former generation who made the “Sungni-58”-type lorry in 40 days from scratch in the difficult period after the war.
That day Kim Jong Un presented a bright blueprint to open a new chapter in the development of automobile industry of the county.
English Language Service, Voice of Korea   www.vok.rep.kp