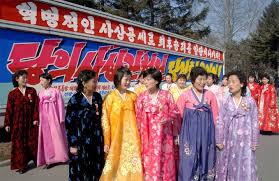 Having stipulated in the law that women enjoy the equal social status as men, the country guaranteed this through the people-oriented democratic constitution adopted in 1948 and the Socialist Constitution of the Democratic People’s Republic of Korea adopted in 1972 and amended and supplemented several times later.

An article of the Socialist Constitution of the Democratic People’s Republic of Korea reads,

“Women are accorded equal social status and rights with men. “

The State shall afford special protection to mothers and children by providing maternity leave, reduced working hours for mothers with several children, a wide network of maternity hospitals, creches and kindergartens, and other measures. “

The State shall provide all conditions for women to play their full roles in society.”

It is a reflection of the policy and steadfast will of the ruling Workers’ Party of Korea and the government of the country to give prominence to women, who occupy half of the population of the country, as part of the masters of the state and society.

The issue of empowerment of women is stipulated in detail in the sector-specific laws.

By the country’s Constitution, Korean women have the right to elect and to be elected like men without any discrimination.

The Socialist Labour Law guarantees jobs for women according to their hopes and talents and without any discrimination. They never experience infringement on their rights to work on the grounds of marriage, pregnancy, childbirth or having children. Rather, they enjoy such benefits as maternity leave and maternity allowances.

The women also enjoy equal rights with men in family life. The Law of the Democratic People’s Republic of Korea on Family, whose starting point is the complete equality between men and women, do not allow any privileges of men in family life; it stipulates that women have the freedom of and right to marriage on an equal status with men as an expression of their voluntary will; it also clarifies the state’s stand to pay close attention to protecting marriage and families and provide all the conditions for women’s sound upbringing and educating of their children.

Under this socialist system the Korean women are leading a worthwhile life for their families, society and state with high dignity and self-respect.