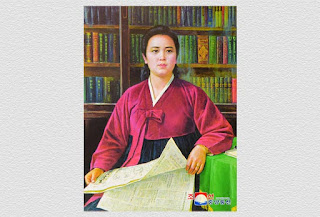 From Voice of Korea http://vok.rep.kp/

Leading the Women to Become Masters of the Country

One day in December Juche 34(1945) just after Korea’s liberation from the colonial rule of the Japanese imperialists, Kim Jong Suk who was staying in Chongjin City of North Hamgyong Province was told that a women’s union organization had been formed in Ingok-dong and called on women’s unionists there.

The women were very excited to meet her.

They felt as if they were in dream when Kim Jong Suk, who had earned her name as a woman commander of Mt. Paektu during the anti-Japanese war, was so openhearted to them without ceremony.

After warmly shaking hands with them, she sat face-to-face with them without reserve and learned in detail about the conditions of the women’s union organization.

A woman frankly told that she had entered the women’s union organization but she was spending idle days without knowing what to do.

After learning about the situation in detail through the stories of the women’s unionists, Kim Jong Suk said: Together with men, our women should also take an active part in the building of a powerful independent, sovereign state. Our women, who lived in sorrow in the past, should actively participate in the work to eliminate the decadent feudal conventions and the old ideological remnants of the Japanese imperialists with our own strength, achieve social emancipation and rehabilitate the industrial establishments as early as possible.

Where there is a will, there is a way. Before liberation, our women took part in the bloody struggle with arms in our hands to liberate the country, and organized the Women’s Association to actively help the Anti-Japanese Guerrilla Army.

Kim Jong Suk also told them impressive stories about the struggle of the resourceful and brave members of the Women’s Association.

Her stories gave the women the conviction that they can do something helpful for the building of a new country.

Looking at the women’s unionists full of vigour for a while, Kim Jong Suk called upon those present to become the core elements and rally all women in the village around the women’s union organization and actively mobilize them for the building of a new country.

Many years have passed since then. Now the Korean women are making an active contribution to the development of the country, true to the intention of Kim Jong Suk.