Present at the service were Choe Ryong Hae, Pak Pong Ju, Kim Jae Ryong and other senior officials of the Party and the government, the chairperson of a friendly party, officials of the Cabinet, working people’s organizations, ministries and national institutions, leading officials of the armed forces organs, officials of the Party Central Committee, service personnel of the Korean People’s Army and the Korean People’s Internal Security Forces, the teaching staff and students of revolutionary schools, officials of institutions and industrial establishments in Pyongyang, persons of merits, bereaved families of revolutionary martyrs, overseas compatriots, those who are related to the revolutionary activities of the President, the chief of the Pyongyang Mission of the Anti-Imperialist National Democratic Front, diplomatic envoys, representatives of the missions of international bodies and military attaches here and foreign guests.

All the participants observed a moment’s silence in memory of President Kim Il Sung.

The past 25 years were the sacred days in which the greatness of the revolutionary exploits the President performed for the country and the people, the times and mankind and their significance in world history were highlighted more brightly and the days of noble inheritance and moral sense of obligation during which our Party and people successfully realized the cause of immortalizing the great leaders for the first time in history and registered proud victories and great changes in the socialist construction true to the behests of the great leaders.

The President is a peerlessly great man the Korean people greeted and held in high esteem for the first time in the history of the nation spanning thousands of years and the sun of Juche who is always alive in the hearts of all peoples century after century.

The speaker praised the President as the founder of socialist Korea who provided precious assets and firm foundations for the victory of the revolutionary cause of Juche and eternal prosperity, and as the eternal leader of the WPK and the people.

He said it is one of the President’s great undying feats for the country and the people, the times and mankind that he provided guidelines for the revolution and construction by founding the Juche idea.

The President regained the country and firmly defended the destiny of the country and people from the aggression by the imperialists, a feat worth going down in the national history.

The President built the Party, state and armed forces of Juche type, realized the unity and cohesion of the whole society and thus performed the undying feats of providing a powerful political force for the victory of the socialist cause.

It is the greatest exploit performed by him that he built the socialism centered on the popular masses to provide the foundation for happiness and prosperity of the posterity.

It is the most brilliant exploit performed by the President for the future of the country and nation that he perfectly settled the issue of succession to the revolutionary cause.

The speaker stressed that the revolutionary career and exploits of the President would last forever along with the eternal prosperity of socialist Korea and victorious advance of the popular masses’ cause of independence, and that the President will always live in the hearts of the Korean people and minds of mankind as the sun of Juche.

There took place memorial services in all provinces, cities, counties and industrial complexes on the same day. -0- 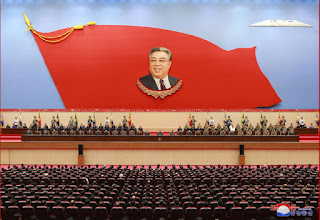