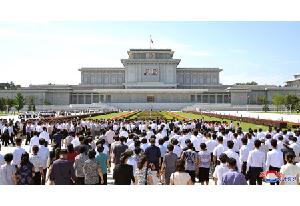 Pyongyang, July 8 (KCNA) — All the Korean people and service personnel of the Korean People’s Army honored the memory of President Kim Il Sung, founder of socialist Korea and great sage of the revolution, on the occasion of the 25th anniversary of his demise.

Working people, youth and students and service personnel of the People’s Army visited the Kumsusan Palace of the Sun, the sacred temple of Juche, on the greatest memorial day of the nation.

Masses from all walks of life entered the plaza of the Kumsusan Palace of the Sun and paid tribute to the portraits of smiling President Kim Il Sung and Chairman Kim Jong Il.

Working people, youth and students and service personnel visited the statues of Kim Il Sung and Kim Jong Il and mosaics depicting their smiling images in various parts of the country including the statues of the great leaders on Mansu Hill to pay respects to them.

At remembrance concerts held in North Hwanghae, Jagang and North Hamgyong provinces, performers praised the revolutionary exploits of the President who saved the destiny of the nation through long journeys of bloody anti-Japanese battles and hard-fought Fatherland Liberation War and opened up a new era of prosperity of the country unprecedented in the 5 000 year-old history of the nation.

Officials, working people and youth and students in South and North Phyongan provinces, South Hwanghae Province, Kaesong City and other parts of the country had remembrance meetings, presentations of poems and songs, oath-taking meetings and other events in which they looked back upon the revolutionary career of the President who devoted his life to the country and the people. -0