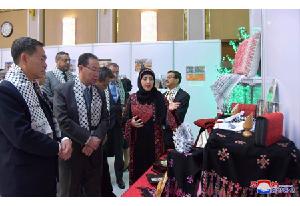 Pyongyang, November 21 (KCNA) — A Palestinian photo, art and handicraft show was held at the Taedonggang Diplomatic Club on Thursday on the occasion of the Day of World’s Solidarity with the Palestine People under the co-sponsorship of the DPRK-Palestine Friendship and Solidarity Committee and the Palestinian embassy here.

Present there were So Ho Won, vice-chairman of the Korean Committee for Cultural Relations with Foreign Countries who is chairman of the DPRK-Palestine Friendship and Solidarity Committee, officials concerned, working people in the city and Ismail Ahmed Mohamed Hasan, Palestinian ambassador to the DPRK, and his embassy members and diplomatic envoys and representatives of international bodies here.

Speeches were made there.

The speakers said that the Palestinian people are waging a vigorous struggle to establish an independent state with Kuds as its capital against the moves of the Israeli occupiers.

They vowed to make every possible effort to boost the friendly and cooperative relations between the DPRK and Palestine forged and developed in the struggle for independence, sovereignty and national liberation.

The participants saw the photos, art pieces and handicrafts showing the struggle of the Palestinian people and their national emotion. -0