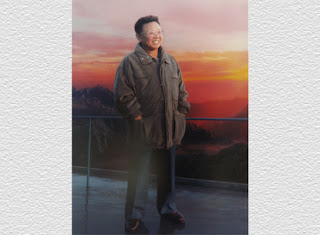 Eight years have passed since the demise of Comrade Kim Jong Il (December 17, 2011)

Comrade Kim Jong Il was the greatest of great men, both in name and in practice. By his death, the world lost the most outstanding man.

When the cause of socialism was undergoing trials after collapse of socialism in several countries, he wrote such important works as “Abuse of Socialism are intolerable” and “Socialism is a science”, proving that socialism is the invariable ideal of humanity.

In the late 1990s when anti-socialist offensive of the imperialist allied forces were focused on socialist Korea, Comrade Kim Jong Il put forward Songun politics as the basic mode of socialist politics by developing in depth the Songun idea that struck its root in the Juche Idea. This provided a powerful ideological and theoretical weapon with which the progressive peoples of the world could advance the socialist cause winning victory after victory under any circumstances and conditions.

Comrade Kim Jong Il was a master of leadership.

He ushered in the heyday of prosperity unprecedented in the history of the Korean nation. In the second half of the 1990s when Korea faced manifold hardship caused by the extreme economic blockade and military stifling manoeuvres of the US-led imperialist allied forces and by consecutive natural disasters, he safeguarded socialism holding higher the banner of Songun, opening a new era of building a prosperous and powerful socialist country. Korea, thanks to his grand plan and his energetic leadership, could become a manufacturer and launcher of artificial earth satellite and a nuclear state. He kindled the flames of an industrial revolution of the new century to ensure that miraculous successes were achieved in all sectors of Korea’s economy.

Grandiose June 15 reunification era, whose principle is By Our Nation Itself, was opened as the outcome of the adoption of the historic June 15 North-South Joint Declaration (June 2000) and October 4 Declaration (October 2007). it is a steadfast aspiration of the entire Korean nation to implement these declarations to the letter and achieve the independent reunification of their country by their concerted efforts, whatever the situation.

Comrade Kim Jong Il pressed ahead with the cause of global independence holding aloft the banner of anti-imperialist independence. His energetic foreign activities conducted on the principle of independence, peace and friendship made a great contribution to building a new, independent world and defending peace and stability of the world.

Comrade Kim Jong Il was the benevolent father of people. He cherished people’s happiness as his biggest wish and worked hard for its realization. He passed away on the train on his way for on-site guidance by a sudden attack of illness caused by mental and physical exertions. His tory has never witnessed such a great man who sacrificed himself heart and soul only for the people.

Comrade Kim Jong Il will live for all eternity in the hearts of the Korean people and the progressive peoples of the world.
Europe Department