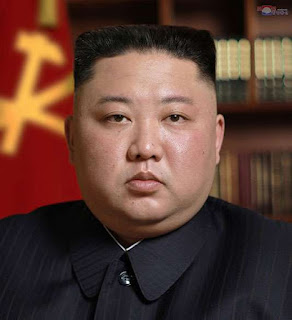 The resolution is as follows:

The general secretary of the WPK is the head of the Party who represents and leads the whole Party.

For the revolutionary Party, the head of the Party is the top brain of the revolution embodying the organizational intention of the whole Party and the center of the leadership and the unity.

To correctly elect the head of the Party comes to be a more important and vital requirement in the period of carrying forward the revolutionary cause and in the period of its fresh development.

The head of the Party vested with the most responsible and important mission by the times and the revolution should possess prominent qualities and capabilities for wisely leading the whole Party.

The current Congress fully supported and approved of the courteous proposal for holding Comrade Kim Jong Un in high esteem as the general secretary of the WPK.

Comrade Kim Jong Un is the outstanding leader of the Juche revolution and the great symbol and representative of our dignified state and people, who has performed the greatest achievements for the Party and the revolution, the country and the people with his gifted ideological and theoretical wisdom, extraordinary leadership and noble traits.

Comrade Kim Jong Un readjusted the leadership and fighting efficiency of the Party in a detailed and all-round way, as required by the idea of building the Kimilsungist-Kimjongilist Party and the developing revolution, and successfully enforced the people-first politics, thus having developed our Party into the powerful general political staff of the revolution, steel-strong elite vanguard ranks and genuine mother party both in name and reality.

Comrade Kim Jong Un has put the overall national power and position of our Republic on the highest level with his outstanding and experienced leadership in a short period of history, the greatest exploit to be most specially recorded in the history of the nation.

Under the wise leadership of Comrade Kim Jong Un, the great action programmes and strategic and tactical guidelines for the revolution and construction in our era have been fully provided, the single-minded unity – the greatest national power of Juche Korea – consolidated in every way, the ranks of successors to the revolution firmly prepared and the popular nature of our state and social system made stronger.

Comrade Kim Jong Un tremendously strengthened the armed forces of the Republic into invincible revolutionary army of the Party and elite powerful army with his Juche-oriented military idea and superb leadership over the army and turned the country into a world military power by successfully accomplishing the great historic cause of completing the state nuclear force.

Comrade Kim Jong Un firmly guaranteed the security and future of the country and the people by strengthening the powerful physical means for self-defense so that no aggression forces can ever provoke our national defense capability. This feat becomes the peerlessly patriotic one to be lauded by the nation generation after generation.

Comrade Kim Jong Un wisely led the struggle for readjusting and reinforcing the overall economy of the country and putting the national economy on a self-supporting and modern basis, built a lot of monumental edifices in the country, which are products of spirit of self-reliance and self-development, and thus opened up the era of great leap and innovation in all fields of the revolution and construction.

Thanks to the devoted efforts made by Comrade Kim Jong Un who made ceaseless journey of selfless dedication to the people, while regarding the hardships and creation for the people as the greatest pleasure and worth of making the revolution, the most advantageous policies for the promotion of the people’s wellbeing and their life and security have been restored and wonderlands for the people to be proud of in the world mushroomed across the country.

Comrade Kim Jong Un, shouldering upon himself the heavy burden of the revolution, accomplished the undying feats before the country and nation. Yet, he, counted all the successes to the credit of people and put forward them as the great people and thankful people. He is the benevolent father of the people and great sage of the revolution followed by all our people with sincerity.

Comrade Kim Jong Un is defending independence, justice and peace with his outstanding diplomatic strategy and proficient external activities and steering the trend of the world politics to be favorable for our revolution.

It is the solemn demand of the times and history, the general will of all the Party members and the unanimous desire of our people to invariably hold in high esteem Comrade Kim Jong Un, the one and only heir to and leader of the Juche revolution and symbol of the mightiness of our state and banner of all victories and glory, as the head of the WPK.

The 8th Congress of the WPK decides to elect Comrade Kim Jong Un as general secretary of the WPK in reflection of the unanimous will and wish of all the delegates, all the Party members, other people across the country and servicepersons of the People’s Army for the sake of the development of the Kimilsungist-Kimjongilist Party and fresh victorious advance of the revolutionary cause of Juche.

All the Party organizations and members, other people and servicepersons of the People’s Army have to make a vigorous advance towards the implementation of decisions adopted at the 8th Party Congress and the new victory in the building of the powerful socialist country under the leadership of Comrade General Secretary, keeping deep in mind the great pride and honor of holding in high esteem Comrade Kim Jong Un, the outstanding leader of the Juche revolution, as the general secretary of our great Party. -0-