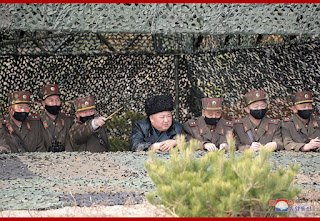 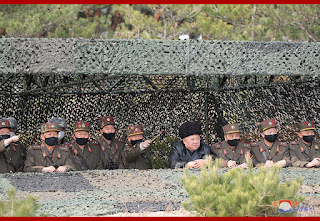 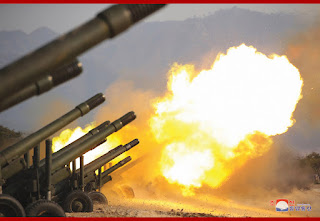 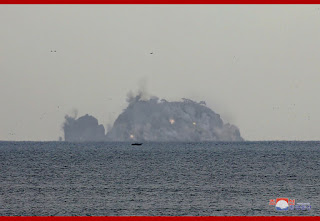 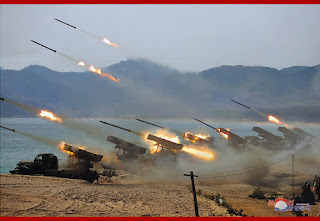 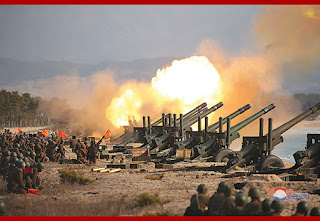 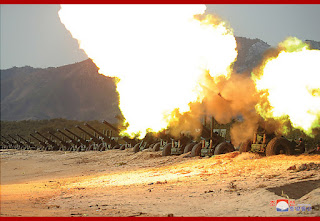 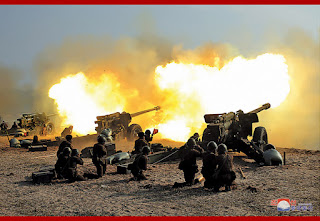 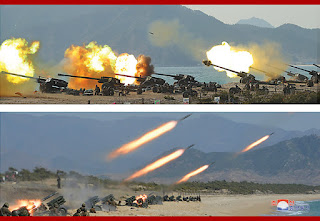 Pyongyang, March 13 (KCNA) — Kim Jong Un, chairman of the Workers’ Party of Korea, chairman of the State Affairs Commission of the Democratic People’s Republic of Korea and supreme commander of the armed forces of the DPRK, guided an artillery fire competition between the artillery units under the Korean People’s Army Corps 7 and Corps 9 on March 12.

The officers and men of the People’s Army were greatly excited to have in the training ground by the sea Kim Jong Un, who provides guidance to the army out of his grand strategic plan to open a golden age of developing the revolutionary armed forces and further increase the defense capabilities of the country so as to make the whole army greet the 75th founding anniversary of the glorious WPK with the brilliant success of opening a great leap in increasing combat efficiency in the flames of effecting a revolution in the training. They were full of immense fighting will and competitive fever to pour a shower of shells into the targets set by the Party with a firm grit and crack-shot artillery marksmanship trained under the guidance of the Party.

The competition was aimed to suddenly make selective inspection and evaluation of how the artillery forces of each corps are getting themselves combat ready to implement the Party’s policy on strengthening artillery force laid down at the 4th Conference of the KPA Artillerymen, to awaken the entire artillery force once again, to fundamentally improve the form, program and method of artillery drills and also to kindle the spark of conducting drills under the simulated conditions of an actual war.

In the competition the firing sequence was set by drawing lots, according to which the artillery pieces of various calibers in the corps opened fire into the target islet. The winner was chosen by combining the firing results and the time taken to execute the mission.

At the observation post, the Supreme Leader learned about a report on the sequence and method of the competition before guiding it.

On his order, the corps commanders directly commanded the firing of artillery pieces at the observation post.

As orders to fire were given by the corps commanders, all the artillery pieces roared, firing the flames to reduce the target islet to a sea of flames in a moment in the spirit of a-match-for-a-hundred soldiers.

Praising the militant enthusiasm and attitude of the brave artillerymen who participated in the competition which was organized without previous notice, he reiterated the requirements of our Party’s training on ceaselessly studying the forms and methods of artillery drills and conducting drills under the simulated conditions of an actual war.

For all the artillerymen to possess high maneuverability and striking capability it is good to hold such drill on a regular basis, frequently organize the inter-corps competitions in the future and arouse the competitiveness among all servicepersons ranging from officers to soldiers, he said. He added that if the General Staff frequently organizes such drills in the future, it can help the commanding officers of all the armed forces have good understanding of our Party’s idea of attaching importance to the artillery, raise their military insight into the use of the artillery and get proficiency in the artillery tactics and fire.

He said that as he had emphasized all the time, the result of firing training is not simply a matter related to the hit probability but it is the reflection of the viewpoint, stand and attitude of the commanding officers and soldiers to our Party’s policy on putting the military training above all, and it also becomes a criterion showing their level of loyalty to the Party, the people and the country. He called on the artillerymen to turn out as one to steadily increase combat efficiency, bearing deep in mind the trust and expectations of the Party that the might of the artillery pieces is precisely that of the People’s Army.

The 7th Corps had an overwhelming victory over the 9th Corps in the firing competition of the artillery pieces of all calibers.

Upon the instructions of the Supreme Leader, the commanding officers of the People’s Army and all the participating artillerymen were full of firm confidence that there is nothing to be afraid of as long as there is the outstanding and tested leadership of the Supreme Leader who leads the cause of building the army along the road of sure victory with his gifted military wisdom and commanding art. They made a firm pledge to kindle higher the flames of training under the uplifted banner of giving priority to training and to steadily increase the combat efficiency and thus defend the socialist homeland shining with the august name of the great Comrade Kim Jong Un as firm as a fortress with the artillery pieces ready to open fire to annihilate enemies. -0-