Many people lost their life caused by COVID-19 and many countries are faced with difficulties in developing economy and achieving social progress.

No COVID-19 has been revealed and confirmed case has not founded in the Democratic People’s Republic of Korea. . 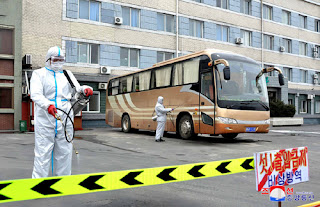 Top-class anti-epidemic measures for preventing COVID-19 have been taken in the DPRK.

At an enlarged meeting of the Political Bureau of the Central Committee of the Workers’ Party of Korea, Supreme Leader Kim Jong Un lightened the way to take nationwide top-class anti-epidemic steps in a more thoroughgoing way and strictly putting them into practice in order to cope with the viral epidemic spreading rapidly around the world.

Thanks to the man-centered politics of the Supreme Leader who enforces the politics of prioritizing the people, the DPRK has made efforts to cope with it.

The measures taken by the DPRK are not aiming to prevent epidemic only but to cherish the lives of the people.

The DPRK has channeled great efforts into prevention of the disease.

The safety of the state and life of the people are being ensured in the DPRK in which anthropocentric politics is enforced and the people are united in one mind.

The embassy staffs and the foreigners in Pyongyang pay their praises that there is no outbreak of COVID-19 as the anti-epidemic works are underway under the control of the state.

Pyongyang is the earthly paradise where the politics for the people is being enforced.