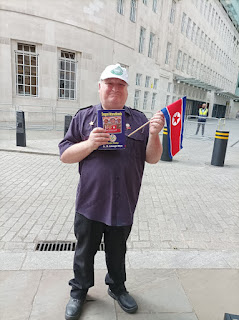 The BBC, which is known to progressive people as the British Brainwashing Corporation , has consistently lied about the Democratic People’s Republic of Korea(DPRK). Its coverage of the DPRK is one sided and exaggerated to say the least. On several occasions BBC reporters have used tricks and subterfuges to enter the DPRK .

The BBC has taken upon itself the role of a shock brigade in the propaganda war against People’s Korea.The BBC is a state broadcaster closely linked to British imperialism and US imperialism .It’s staff are vetted ,so that no one with pro DPRK , pro socialist views can work for the BBC or indeed anyone to the Left of Genghis Khan , in the BBC it is very much ‘No lefties here John ‘ . The BBC promotes the ideology of market totalitarianism and liberal fascism .

What is disgusting is that not only does the BBC lie about People’s Korea  but it expects us to pay for its lies in the form of the BBC licence fee .

It would take too long to list all the lies told by the BBC about the DPRK but here are some examples: On the 10th of February 2016 the BBC reported that former Chief of General Staff of the Korean People’s Army General Ri Yong Gil had been executed . This has been proved false. General Ri was elected to a position at the 7th Congress of the Workers’ Party of Korea held in May 2016 and was promoted in April 2017 (by order of Marshal Kim Jong Un)  and a month ago was appointed vice Marshal of the Korean People’s Army , far from being dead !

In May 2016 BBC reporter Rupert Wingfield-Hayes signed a statement admitting that his reporting was biassed and inaccurate. Amongst other things Wingfield-Hayes claimed that children at the Okryu Children’s Hospital were not ill and were actors!!!

The BBC consistently demonizes and smears the DPRK by using clichés like “impoverished”, “totalitarian “ and “ isolated “ . Rather than being impoverished the DPRK has a rapidly growing economy, it is a people-oriented society and rather than being isolated has diplomatic relations with over a 100 countries !

The BBC not only attacks People’s Korea but it was partly responsible for a criminal film slandering the Korean Friendship Association which involved the underhand and dishonest infiltration of the Korean Friendship Association and covert and illegal surveillance of KFA members which could have set up for victimisation at work and even physical attack from fascist anti-DPRK elements .

The BBC not only pumps out false propaganda against the DPRK but it is also a regime change agency . We should never forget the role that the BBC World Service in undermining and destroying socialism in the USSR and former socialist countries . Now the BBC is trying to do the same with the DPRK and beaming its lies into the country . We must defend People’s Korea from regime change .

We, the Korean Friendship Association of the UK, believe in defending People’s Korea with No Ifs or Buts .

We believe the BBC should stop lying about the DPRK and instead produce fair, accurate and objective material about People’s Korea.

Down with  the British Brainwashing Corporation !