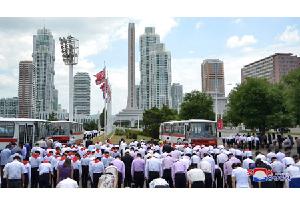 Pyongyang, July 8 (KCNA) — The whole country is being wrapped in the strong longings and deep reverence for President Kim Il Sung, the great sage representing the 20th century, and the kind-hearted father of the nation, on Monday, the 25th anniversary of his demise.

The feelings of strong longings for the President pervaded the whole country on the greatest memorial day of the nation.

Flags are seen at half-mast in all units including institutions, enterprises and factories at all levels and farms, fishing villages and schools in Pyongyang and in provinces, ranging from Phungso-ri, Onsong County at the northern tip of the country to Phyonghwa-ri, a village near the Demarcation Line in Kaesong and from Pidan Islet in the West Sea to Lighthouse Village on Al Islet in the East Sea.

Sirens blared all at once across the country at 12 sharp.

Sirens reverberated far and wide in cities, villages, worksites and in all units and also by trucks and locomotives that had been running.

All the people and service personnel offered three-minute silent tribute for Kim Il Sung, founder of socialist Korea and eternal president of the DPRK, in the deepest reverence. -0-