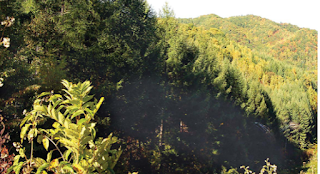 Ogasan Nature Reserve is situated on the border between Hwaphyong County, Jagang Province, and Kim Hyong Jik County, Ryanggang Province, which are northern inland areas in the Democratic People’s Republic of Korea.

The name of Mt Oga was derived from the fact that the mountain has five peaks of 1 000 metres above sea level each in its primeval forest.

Ogasan Nature Reserve was established in 1976 on a total area of 6 500 hectares, of which 1 740 hectares is covered with the primeval forest.

The forest, a natural monument, is one of the oldest forest areas in Korea. It can be proved by the rings of its trees.

For instance, a pine-nut tree in the forest is 550 years old. It is the second biggest pine-nut tree in Korea with the height of 25m, root neck circumference of 5.1m and crown diameter of 8m.

The 700-year-old linden tree has a great academic significance in verifying the history of the forest.

The yew tree, which is 1 100 years old, is one of the biggest and oldest yew trees in not only Mt Oga forest but also Korea.

There are many other rare trees such as fir trees and Mongolian oaks which are hundreds of years old.

The moss-covered fallen trees, apparently hundreds of years old, and the tara vines, 30-40m long and 10-20cm in diameter, twine around the trunks of trees–these clearly show the natural state and long history of the forest.

The flora of the reserve is very diverse in the composition of species, for it is situated on the border between the subarctic plant distribution area and the temperate plant distribution area. Northern and southern plants grow together, unfolding a peculiar natural scenery in which plants of different climatic zones can be seen at the same time.

trees, birch trees and Korean poplars grow in the area over 1 000m above sea level.

Ogasan Nature Reserve is a favourable habitat of animals as it has dense forests and diverse natural and geographical conditions. More than 130 species of animals live in the reserve and their numbers are larger than in other areas.

In a word, the reserve can be called a large natural history museum.

Fiber and timber plants of dozens of species such as fir tree, Abies nephrolepis, Korea larch and aspen tree are found in dense forests of the reserve. Also there are a lot of trees for special usages such as Acer triflorum, thorny ash tree, amur cork tree and Betula Schmidtii. Species of aromatic plant, dye plant and feed grass number hundreds.

Medicinal plants such as wild insam, edible herbs such as aralia shoots, Umbelliferae and anise and various kinds of mushrooms can be found everywhere.

Wild fruits of dozens of species such as wild grape and gooseberry and various oil fruits such as pine nut and wild walnut collected there amount to tens of thousands of tons a year.

Mt Oga is also one of the best honey-producing areas in Korea. The honey produced there has a special taste and medicinal properties.

Today, the treasures of the mountain are getting richer thanks to the nature conservation policy of the Workers’ Party of Korea and the government of the DPRK.

In the past 46 years since Mt Oga was designated as a nature reserve, the protection of animal and plant resources has been carried out in a scientific way and the research of its ecosystem has been intensified. As a result, the amount of the resources is increasing year after year.

With this as the background, the whole reserve was registered as a natural monument last year, facilitating the conservation of the resources.

Ogasan Nature Reserve is one of the DPRK’s priceless national assets.